Paired, my trees mark gates of the old workhouse
(now private residential streets, like many)
surround themselves with (I’ve just learned this word)
suckers – new growth that gardeners control.
Their bark is grey. Not photo grey but live,
gnarled and with recent branches offering
leaves greenfly have holed. The trees stand tall,
one bent. The tree book keeps them with X rating. 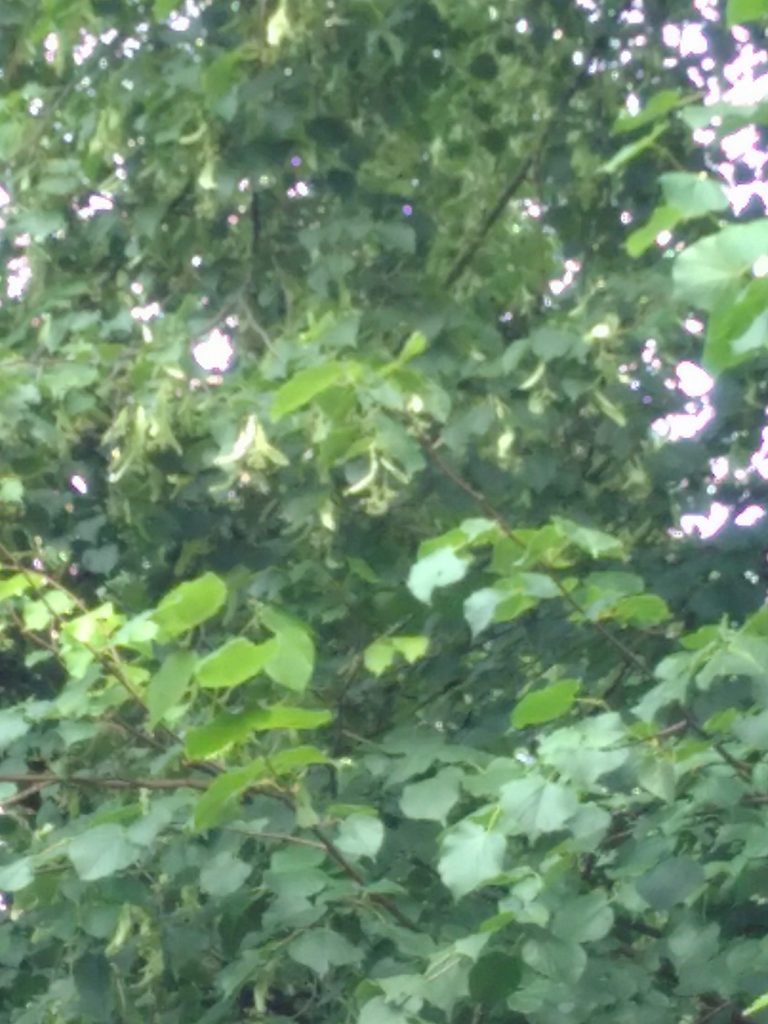 Limes, in the context of this project, are of the genus Tilia, and unconnected with the citrus fruit.

The lime tree yields valuable products.  Its wood is pale and cuts very cleanly. Mabey has stories and a picture of work by Grinling Gibbons at Chatsworth House, St Paul’s Church (Covent Garden) and Hampton Court Palace, citing praise for its lightness from the eighteenth-century writer Horace Walpole and the wood sculptor David Esterly.  Esterly remade Gibbons’ Hampton Court carvings after they were destroyed by fire in 1986. His own New York times obituary in June 2019 described lime wood as “pliable and almost grain free, so much so that it resembles smooth marble”.  In the Eastern Orthodox Church, lime is the preferred wood for altar carvings.

The less durable output of the lime includes blossom, with its fragrance, and fruit.

The blossom appears for a short time in July, and tree enthusiasts hearing of the 26 Trees project urged me to enjoy this.  When harvested, the blossom can be made into a drink, sometimes called limeflower tea, and accounted a herbal sedative. It was recommended for that purpose during the Second World War.

The fruit is wholly unlike the citrus that shares its name.  According to Mabey, it is “just about edible and [has] a curious cocoa-like taste”.  Stories about making it into a chocolate substitute have turned into a cloud of evanescences.  The techniques are attributed to an elusive French chemist named Missa, who’s variously dated to the late nineteenth century and to the time of Frederick the Great.  They are said to have only recently come to light, but no citation is given. The recipe itself calls for immature fruit and warns that the product has a brief shelf life. Well, it would, wouldn’t it?

I have been making efforts to trace this Missa.  Perhaps continuing them would lead to a fascinating individual.  I fear it would more likely crumple to a trail of misreadings and mistranslations.  I’ll settle for exploring, in churches and great houses and museums, what the imagination of Grinling Gibbons and David Esterly made out of lime: wood sculptures that are beautiful, light, exquisitely detailed, but solid and lasting.