What is a tree?
A tree, my love
Makes wind true
Hands peace a voice
Reveals the day
Through half-light
Kind fracture
Of dappled leaves
And a sort-of-quiet
In your roaring soul.
Here where light
Drenches green.
The heavy moon
Drips through
Tangled branches
Like blackened snow.
What is a tree?
It is time, my love
Skittish, scattered
Stippled time.
Hold still. 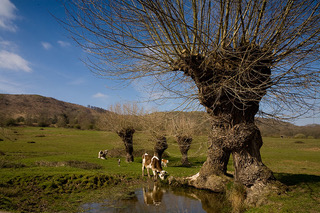 This is a story of the Black Poplar, the most endangered native timber tree in Britain. It is also the story of a five-year-old boy born in Syrian prison who does not know a tree at all.

It’s not easy to find a poplar in Dorset. But then, finally, a black poplar (populas nigra), reveals itself in the sunken valley of the river beneath Corfe Castle. Locals say it may be old enough to have seen the castle in its heyday before the civil war with its trunk of 730 cm, which they say is a record, beating a comparable tree in Somerset that is known to be 350 years old and measures 450 cm.

Black poplars were once cultivated for use in shipbuilding. Resistant to shock it was also used for matches, carts, floorboards and clogs. Arrows found on the Mary Rose were carved from black poplar. Today, the wood is used for artificial limbs, wine cases, pallets, shelving and toys.

Two hundred years ago, Black poplars were a quintessential part of the British landscape, with their wide rounded crowns and straggly outlines. It is a tree that features in Constable’s famous 1821 paining The Hay Wain. But now this tree is rarer than the giant panda, there are just 2500 left in Britain, of which only 400 are females. The gradual draining of floodplains for farmlands and the woodland clearances during World War Two have stripped its natural habitat of low-lying, marshy soil. According to the Forestry Commission, black poplar is the most endangered native timber tree in Britain.

So it felt right to start my black poplar poem with the words of a five year old boy born in a Syrian prison. “What is a tree? What is a bird?” Caught in conflict, imprisoned inside four walls, this child has never seen a tree, never seen a bird. When I stumbled across this story on Instagram from Olivia Sprinkel (@oliviasprinkel) who is researching and writing A History of the Future of the World in 10 Trees, I knew I wanted to borrow these words. Olivia found these words from Birdsong, a series of works initiated by Sigil @sigilcollective. It is not that this child does not know a specific tree or a specific bird, he doesn’t know what they are at all. What would it be, not to know a tree?