Taiko drums warble
And babble
As the forest nymphs
Cavalcade down the mountain
To take their place around
Old mighty always.
‘Perennial seven. Forgotten, twisted sisters.
Form the arboreal belt for
The belly of the heavens’.

Our dead king spinning a knife
In his fingers steps inside.
He cuts the surface
And places a walnut
In the scarred earth
Before they sing. 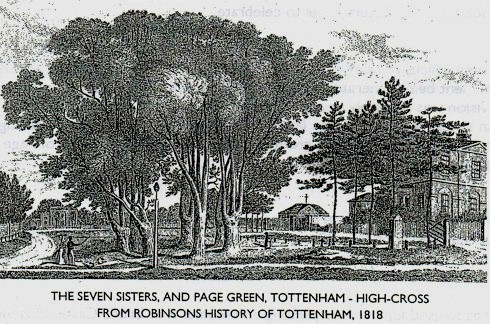 Seven Sisters in north London owes its name to a centuries-old tradition of planting seven elm trees in a circle on Page Green. The green is now little more than a strip of unassuming grass beside a Tesco, but a symbolic circle of trees still stands there. It’s symbolic because its constituent trees are no longer elms, but hornbeams, there to represent the original ring, replaced once already when the elms didn’t fare well in the English climate.

It seemed serendipitous, then, having not lived in London for long, but in an area fairly close to Seven Sisters, that the tree I received when joining the 26 Trees project was the elm.

I knew I wouldn’t be able to follow the project instructions of interacting personally with my chosen tree, since these seven elms were replaced more than one hundred years ago, but I’d found my hook, and it was too intriguing not to pursue.

According to an article in Londonist, the first evidence of this phenomenon is from exactly 400 years ago. On a 1619 land map, an ‘unnamed arboreal ring’ can be seen on the western side of Page Green. But it wasn’t until 1732 that they were actually recorded as the Seven Sisters.

The limited information about this ring of trees has yielded many fantastical theories, compounded by, as the article points out, the name Page Green being very similar to Pagan Green.

With this in mind, I decided that my poem would witness an eldritch ritual that cross-pollenated features of this story with other practical and mythological narratives associated with the elm tree.

One practical association comes from the Japanese taiko, a drum made from elm. A mythological one comes from the Hamadryads, the nymphs of the forest, of whom one was Ptelea, the elm nymph. Nymphs were also said to have planted elms on the graves of several Greek warriors who fell in the Trojan War, giving the tree a symbolic and sombre relationship with fallen heroes, death and commemoration.

As for the walnut involved in the poem’s ritual, there was once a walnut tree in the very middle of the ring of elms. With a walnut being symbolic of potent masculinity, there seemed to be a lovely contrast with the nurturing maternal energy of Ptelea and the nymphs who honoured fallen soldiers.

Altogether, the confluence of this historical and mythological information came to render a mystical scene that sits a little beyond understanding.