You,
in a forest of oaks
are the Major Oak,
myth heavy,
fat with tales,
trunk pitted
boughs bowed,
strutted,
but not strutting. 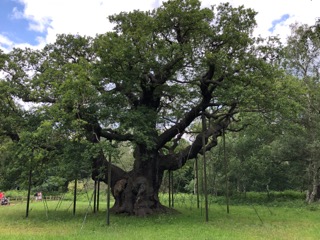 He’s no Mr. Darcy. In fact, he must be the least dashing romantic hero in English literature. He’s not even the most dashing romantic hero in his own book. That’ll be the charismatic but ultimately unreliable Sergeant Troy. By contrast, Gabriel Oak is the steady Eddie of Far from the Madding Crowd, the dependable, true-hearted, eternally patient yeoman, committed to waiting as long as it takes to win the hand of Bathsheba Everdene. His name is such a giveaway, that even on first encounter you pretty much know that you’ve just read a spoiler alert, and you’re left wondering why Hardy gave Gabriel a name so loaded with character and destiny. There’s never a chance that he would turn out to be a spineless cad and bounder, as he might have done, had be been called, say, Gabriel Willow.

So what it is about oak trees then?  As with so many symbols, there is a basis in fact. It so happens that oak trees are notably long-lived, like the doughty Major Oak, of 1,100 years and counting. Even that is a mere teenager compared to the Seven Sisters Oak in Louisiana, which is believed to be 1,500 years old. Oak is also extremely tough, as anyone who remembers using it as a material during school woodwork lessons can attest. Toughness brings higher than average resilience to diseases along with it. Which brings us back to longevity.

Its cultural significance is as old as civilisation. Zeus, no less, was known as the oak god, and his wife Hera was the oak goddess. An oak tree was at the heart of the oracle at Dodona, which was founded, according to tradition, when a black dove settled in its branches. The priests would understand the will of Zeus by interpreting the rustle of the wind through the oak’s branches.

With that starting point, the oak was always going to be the king of the forest, ruling through stability and endurance. And perhaps in a world that is more uncertain and shifting than at any previous point in history, we need the oak tree’s qualities more than ever. We could all do with more of the constancy that Gabriel Oak demonstrates: “I shall do one thing in this life – one thing certain – that is, love you, and long for you, and keep wanting you till I die.”

All hail the mighty oak.