A scrubby shrub.
The purge and goad of beasts
But I keep winter robins fed.

From swaddle to shroud,
On the niddy-noddy of fortune,
I sketch your fate.
The heart wood of your fibre,
I’ve spun you every yarn.
Whorl, drop, draw.

Glossary
whorl – a spiral or circular pattern, also the weighted part of a drop spindle.
prickwood – another common name for the spindle tree
niddy-noddy – a tool used to make skeins from yarn. 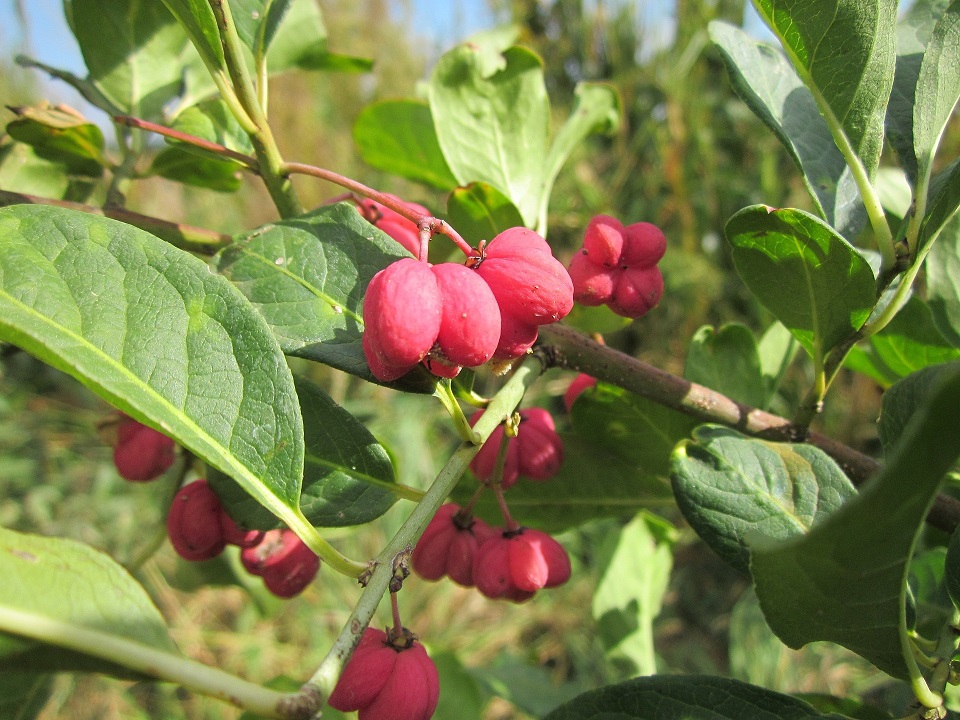 The spindle tree proved to be rather elusive. A feisty, stoic, shrubby little thing, it waits until winter to show off its bright pink pods. The orange seeds inside are poisonous to humans and many animals, but are popular with robins, giving this tree one of its many common names of ‘robin’s bread’.

A winter tree then. One that blooms in darker days. I liked it already.

I’m no naturalist and looking for my tree I kept finding the very similar looking dogwood. Well, I think it’s dogwood. I’ll find out come the winter, long after my writing deadline has passed.

So I sought the spindle in the library. The ‘Father of Botany’ William Turner gave the name ‘spindle tree’ to the Euonymus europaeus in the 16th century.  “The Duche men call it in Netherlande, spilboome, that is, spindel-tree, because they use to make spindels of it in that country, and me thynke it may be as well named in English.”

A useful tree, I learned. Its smooth wood can be sharpened to a fine point without splitting, making it ideal as a cattle prod. It also makes fine artist’s charcoal.

But it was the spindle’s connection to spinning, its association with fairytales and spells cast by wicked fairies that drew me into the rich heart of my tree’s story.

My quest led me to the Durham Guild of Spinners and Weavers where I unearthed a rich horde of new words. Whorl – the weighted part of a spindle that helps increase the spin and momentum… Drop – the name for the simplest of spindles, used without a wheel… Draw – the action of teasing an unformed mass of raw wool, linen, flax or cotton into strands… Niddy-noddy – a device to wind yarn in a figure of eight, ready to knit, weave or crochet.

Drop spindles have been documented back to 1AD and were probably in use before recorded history, certainly long before spinning wheels came into common use in 16th Century Europe. They are associated with many powerful beings from the Norns of Norse legend, to Egyptian Isis and the Greek Fates.

In the guild’s hall, I was bewitched by quiet mindfulness, entranced as spindles and spinning wheels turned, stories were told and yarn was spun. A spell was cast and my sestude begun. It would take a few more revolutions and some weaving of words to bring it to you.