and older wind-frayed fronds droop
as heat grinds breath between its hands. 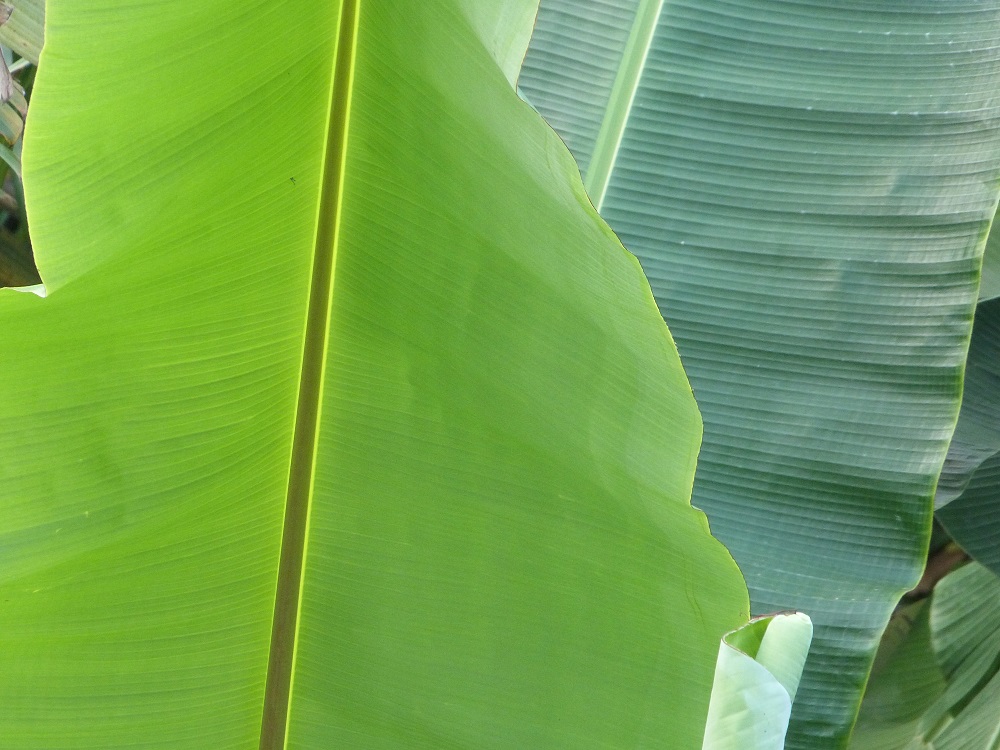 “What is the tree when it’s no longer a tree?” – that was the question we were supposed to be responding to.  But I need to step sideways first and ask: “When is a tree not a tree?” The answer is: “When it’s a banana.” Even though it looks like a tree – it’s tall as a tree – everybody calls it a tree – the banana is, instead, the largest herbaceous flowering plant in the world.

It has a strange, un-treelike anatomy.  Growing out of an underground rhizome is a pseudostem, made up of the wrapped bases of those exuberant leaves.  After the banana fruits have matured, the pseudostem dies, but other offshoots are already growing up to replace it.  This odd way of growing and reproducing has prompted a fabulous array of names for parts of the banana plant – pups and peepers and maiden suckers, hands and fingers, cigar leaves, bells, bracts and peduncles.  A sestude in waiting.

I stayed in Jakarta recently, in a new housing development.  Out of the upstairs window I looked down on a little farm. The owner wouldn’t sell his land, so the new houses and the motorway cup the edge of his banana grove.  (One of the scientific names for banana is musa sapientum – fruit of the wise man.)  I struggled to breathe in the heat and was overwhelmed by the sound of five, six, seven mosques’ out-of-sync loudspeaker systems echoing around.  But banana trees have thrived in this climate, letting the sounds of human religions wash over them for 10,000 years.

Domesticated for so long, what have banana trees given us?

The world’s favourite fruit and so much more.

And asking one last sideways question: “When is your banana tree poem not your banana tree poem?”  The answer to that is “When you pass it through Google Translate, back and forth between English and Bahasa Indonesia, a half dozen times or so.”  Which I couldn’t resist doing. I love the surrealism of the result, with its