Yeasty briny spores seeping from under the veil of Flor,
nut-dryness dripping onto chlorophyl-green leaf, dropping like stone onto ochre-red ground.

*Known locally as the giant rubber trees of Cadiz 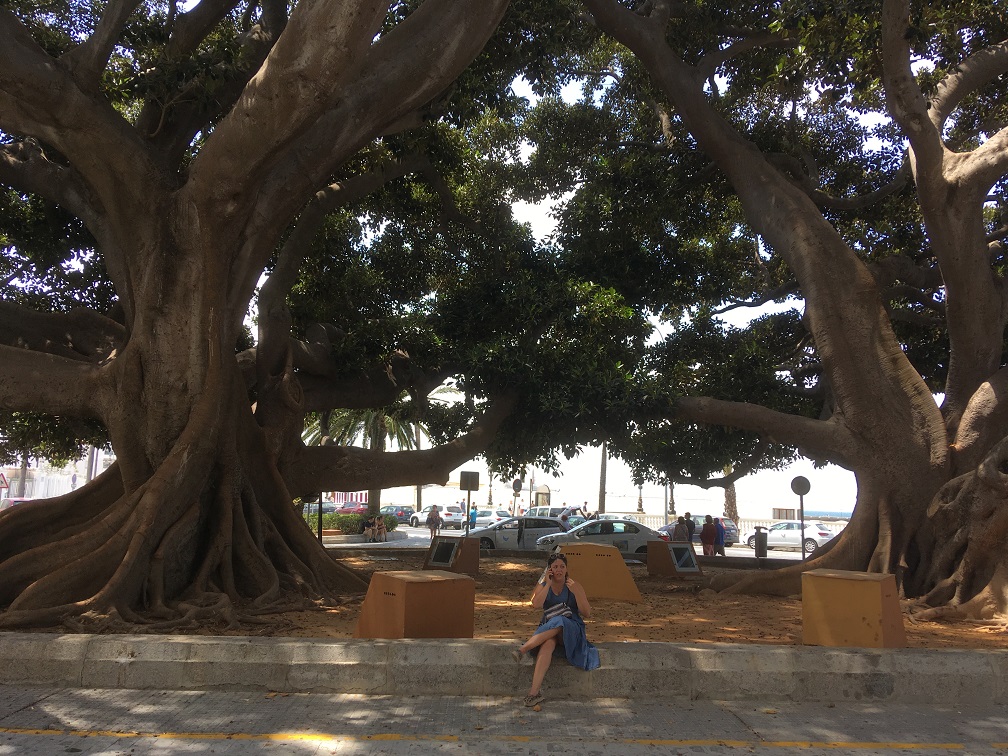 It was sitting in the Harcourt Arboretum in Oxfordshire on a glorious breathless sunny day, under the shade of tree species from all over the world ,that I had my moment of inspiration. Maybe it was the heat and lack of a breeze but I was drawn to one of my favourite places in Spain.
I have a love of Spain and have lived, studied and written there on and off through my life. I was going to Cadiz, in Andalucia, for a short holiday in a week’s time. I remembered one of the great images of the city-a pair of giant rubber trees (Ficus Macrophylla) hundreds of years old , that stand united in a plaza looking out to the Atlantic and the New World. They symbolise for me Spain’s Golden Age and dominate this part of the city from where Columbus and others sailed to the New World and brought back treasures and riches (carried upstream by galleons to Seville via Cadiz and the Guadalquivir River) but also plants, seeds and other wonders. Local legend has it that the trees originate from this period and those seeds but science suggests otherwise….

Nevertheless to my eye the trees have borne witness to past national glories and sorrows, flourished in good times, wept at bad.  They carry dark secrets within their bumps and hollows and serpentine branches, they are trees of life.In the past, they were working trees, milked for their precious latex and scarred in the process.
In Cadiz, a week later, I sought them out and found them well. I would sit, of an evening in their shadow, late into the night, and partake of a glass of Fino, the local sherry. Unlike in England the wine is taken chilled and presents as dry as a nut. The air around me is still, scarcely moving, heavy with yeasty spores and salt encrustations. The air settles upon the leafy canopies of the twin trees. The ethereal moonligh bathes the scene in a pale yellow glow.

A chlorophyll-green leaf slips away.just out of reach of trailing little fingers.

A zephyr drifts across the African straits, offset by a nebulous glow of blood-red prose from Lorca and cobalt blue notes from De Falla. The conjoined trees sigh, two ancient mariners feeling the caress of the sea breeze on their cheeks once again, knowing that they, never again, will put to sea.