I might have been a cathedral beam,
the keel and prow of a plunging galleon,
a sturdy crooked house frame.
I might have been so useful
but for growing on this little hill,
unnoticed by builders and makers.

So since the world shunned me
I grew into my own world,
a habitat for plants and creatures,
I am their source of life. 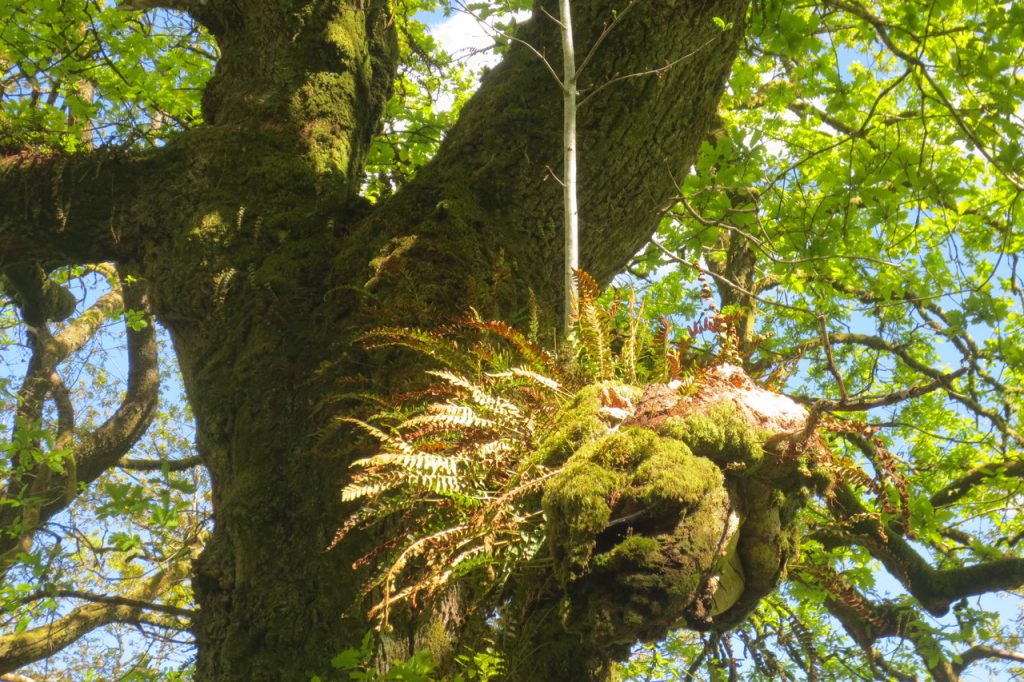 When a tree is no longer a tree it is an eco-system of cavities and canopy, a shelter for creatures, any one of two hundred and eighty species of insects, birds, butterflies and bats.  On a remote Welsh hillside stood The Pontfadog Oak. It was a sessile oak whose girth, in 1881, was measured to be sixteen metres. When it blew down, in April, 2013, its age was estimated between a thousand and sixteen hundred years.  It had lived and thrived through more than a thousand Welsh winters, bending before gales and thunderstorms, gathering light from a seldom sun, turning its rough skin into furrows for a myriad of small beings to inhabit.

Even whilst it is still a living tree the culture of the oak is rich. It was a tree of Greek, Roman and Celtic Gods – the deities of storms – its upstretched boughs inviting the touch of scorching fingers of lightning.  At the bottom of Glastonbury Tor stand two great oaks, Gog and Magog, the Oaks of Avalon, thought to be two thousand years old, named for the survivors of a legendary race of giants, and an entry point to the home of Arthur and his court. In Birnam Wood, in Perthshire is the Macbeth Oak, which features in Shakepeare’s Scottish play.  These old trees wear an mystical aura.

Its timbers have made buildings that have stood for hundreds of years, great ships that have roamed all the seas of the world. It has provided countless barrowloads of firewood against the winter cold. It is the tradtional Yule log. It is medicinal. It is aged beyond any single human life.

To stand amongst trees that have been in situ for most of the history you learnt at school, is a humbling experience. They are often bent, twisted and broken, whether by years of storms or through pollarding. The twist of their limbs is not graceful, it is a record of survival. Pollarded oaks become mishapen with huge bases and thinned out upper limbs where the cut boughs have been taken for firewood. They are seldom whole in form or pure in species. Old oaks nuture other plants, ferns, ivys, mosses and all manner of parasitical vines, and in Spring, many rest in beds of bluebells and primroses for the great pleasure of those who see them.