It amused my daughters that a town in distant south-east England shared the
name we gave their favourite tree.

We never went there, which is probably just as well.

I don’t mean that cruelly: but with its startling protuberance, blending nature’s
wonderful perversity with the feel of low- budget sci-fi dystopia, no town could
ever hope to capture the essence of . . . 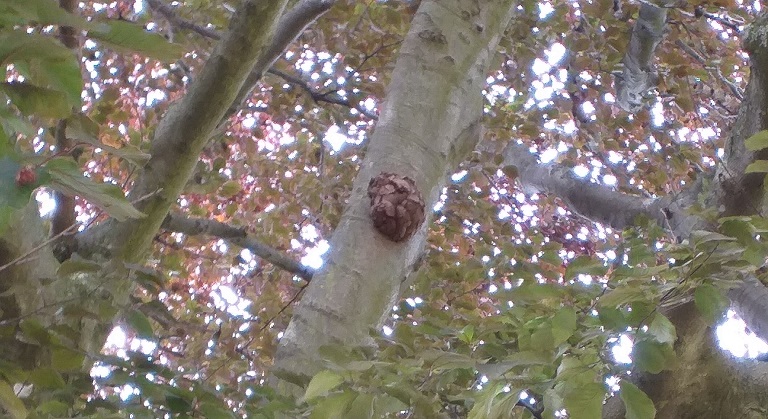 I had a moment of panic when I went to Lewisvale Park in Musselburgh to look for The Braintree.

I was sure I was in the right spot, examining a beautiful copper beech (as I have recently learned: I’m ashamed to say I could never have told you that in my daughters’ childhood years) but I couldn’t see that distinctive, slightly alarming growth.

The Copper Beech’s Brain Was Missing.

Or had the entire tree been removed? Was I looking at the wrong one?

I saw evidence of treefelling at the periphery of the park, but none here: surely it wasn’t possible to destroy all evidence of such a magisterial, imposing presence?

I Facebooked local community groups to see if anyone was aware of the removal of a tree which looked like it had a brain, but was met only with baffled silence.

My older daughter, though, assured me she had seen it just recently and returned with me.  We looked again at the tree to the right of the main path and… praise be…. there was the brain.

It was rather higher up than I remembered.  Also, it was a much brighter day: my previous visit had been enveloped in overcast murk. (These are just excuses, though: as anyone who knows me could tell you at length, observation has never been my strong point).

So, The Braintree survives, as, in my mind, it always will. Being asked to consider what might befall it in its afterlife feels like as great as a leap into science fiction as the brain itself. But nonetheless…..

I’ve googled the uses to which copper beech wood has traditionally been put.

So I’m picturing our lovely Braintree – in the fact the brain itself – being soaked, dyed, varnished and glued.

Our brain being steamed to make it easier to machine, thereafter to utilise its excellent finish and resistance to compression and splitting.

Our brain – stiff when flexed, difficult to mill due to cracking – being particularly well suited to the fashioning of chairs, flooring, staircases, mallets, workbenches, fireplaces, even railway sleepers.

Our brain sometimes being used for paper pulp.

So maybe, just maybe, sometime in the future, my daughters might be writing their fond memories of our gorgeous Braintree on its brain.

This was an idea which upset me initially. But I’m coming round to it now.