I have watched the see-saw of lives across time.

In all these lives, I live on
And on
And on.

Inspiration: Twt Park in the market town of Cowbridge, was presided over for 250 years by the Twt Beech. It was finally deemed unsafe in 2018 after an x-ray, and had to be taken down. But it had been such an enduring fixture in our town that many decided it must live on: in art, furniture, beer, buildings. The Twt Beech has become a story about the life of a tree after the life of a tree. 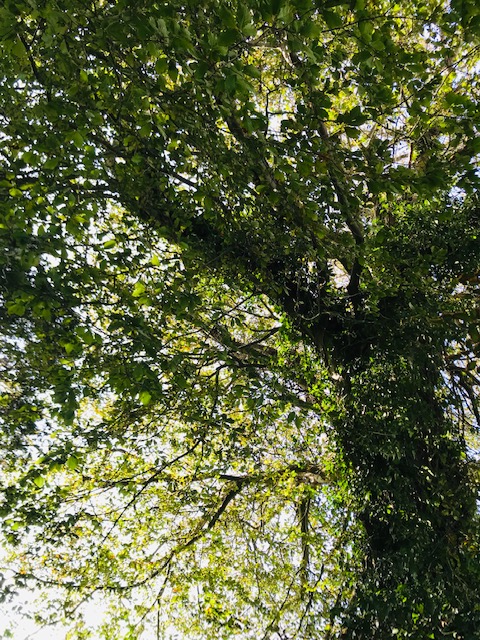 January. An uneventful birthday gift. Dull beige (we’d always joked that beige must be the colour people wore in heaven, hence its popularity with the elderly, practising for the pearly gates), seasonally inappropriate. I offered generous thanks, a lovely idea, then I squished the hammock back into its paper wrapping and in turn, into the bottom drawer. Forgotten until such a time as the weather wasn’t attempting to fell the trees outside with sheer sheets of icy January rain.

Months later, rummaging when I should have been writing (sometimes clearing a drawer also clears the head, win-win) my fingertips fell upon it. The spring air was still chill enough to catch a sharp ‘v’ in my throat, but warm enough in sheltered corners to relish, nonetheless. I knew where I was headed. I tucked the hammock under my arm and strode out.

To the twin beeches. My secret cwtch. My favourite corner of the copse. I’d sought the haven of their dark shade in all weathers, carved names in their silvery limbs in love and in loss. I’d always loved the beeches: tree of the faeries, encircled at nightfall, they said, by dancing, magical creatures. Worshipped by ancient pagans as the queen of the trees, source of wisdom and creativity, the sacred wood of the summer solstice. Whether simply my imagination, or something more, these things vibrated within me.

The two trees facing me formed part of a disjointed procession probably once intended as a hedge. With erratic gaps and seventy feet tops, all hopes of the hedge – or of the beeches being part of anything but the copse – were long dashed. Until today. Now my hammock and I would join them. We’d be part of something, the trees and me.

I secure the knots and climb in.

Now, strung between the beeches, adrift, I’m swinging freely beneath their shimmering chartreuse frogging, warm air brush-rushing my face and ears with whooshing sea-sounds. White noise birdsong. A squirrel leap-freeze-leaps to investigate, diving beneath my ship to scratch at the winterlong mulch carpet of beechnuts, leaves and spores before scooting off to other business. I close my eyes. A sudden moment of shocking stillness lulls me, transitory: but the spell’s broken in a heartbeat by the battering wings of amorous wood pigeons.

I laugh. My beeches are alive. My energy surges with the rising sap. I am joyful.