White man proclaimed the state by the Old Gum Tree, though the Kaurna were there long before. He spread out along the mighty Murray, using redgum to build houses, farms,
communities.

Now the redgums are stressed, branches falling; the river, dying. Gumnut babies for generations past; grey-green leaves in ceramic form only. 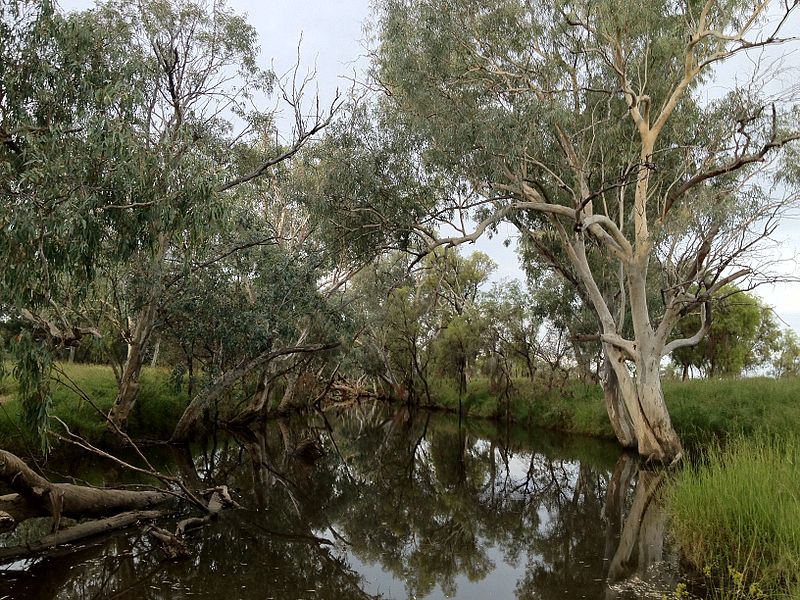 A National Icon is Dying

The redgum (Eucalyptus camaldulensis) is the symbol of my childhood. It’s the familiar sight along rivers and waterways in southern Australia, where I was born and spent my first 26 years.

It’s the tree you probably have in mind when you think of Australian fauna – those long, silver branches reaching high into the sky; bunches of grey-green leaves pushing forth at the ends like unruly hair. It spawned so much Australian popular culture, too. For generations, Australian children have read May Gibbs’ tales of “gumnut babies” Snugglepot and Cuddlepie, while tourist stores push jewellery sporting ceramic gum leaves.

My home state of South Australia was proclaimed by “The Old Gum Tree” – a fallen redgum slightly inland in what is now Glenelg – in 1836, but of course that was not the beginning of settlement in the area. The Kaurna people were the indigenous tribe of the Adelaide Plains, their culture wiped out within decades of that proclamation.

This intersection of cultures marked the beginning of a march inland along the Murray River as towns were settled and farms established. Redgum wood is used in traditionally rot-resistant applications like stumps, fence posts and sleepers, and is a favourite for craft furniture-makers, its brilliant red wood providing stunning accents. Redgum provided the foundations for the country.

Prolific along watercourses, and providing shade in extreme temperatures, that redgum also craves water. It relies on rain and flooding to recharge the sub-soil, while those that grow in the river’s banks provide a breeding ground for fish, its fallen branches an important part of the river ecosystem.

Today, almost 200 years since the Old Gum Tree witnessed the birth of a state, 75% of the redgums in the lower Murray are stressed, dead or dying. Those further upstream – the agriculture industry of the Murray-Darling basin – have spent 200 years taking from the river without giving, and those lower down are suffering the consequences.

The national science centre, the CSIRO, proclaims the redgum is “more than just a tree”, being central to the tensions between economic, social and environmental values of rivers and the floodplain landscape of Australia. Its status as one of the most widely-planted Eucalypts in the world must ensure generations to come can enjoy its shelter, and it can continue to support settlements new and old along the rivers of my home.