When I heard that 26 would be joining in the centenary celebrations of Roald Dahl’s life with a new project, 26 Twits, I knew I wanted to be involved. As a life-long member of the Dahl fan club, I’ve enjoyed his stories for what seems like forever.

I was delighted to be given my chosen character of Slugworth, Willy Wonka’s enemy from Charlie and the Chocolate Factory. So, first things first, I re-read the book, then re-watched the film adaptations. In both films, Slugworth is given more invented story than in the original book. I decided I wanted to work from something that Dahl had created, rather than subsequent interpretations. Using only the book proved more challenging than I expected as he’s only mentioned a couple of times; no physical description. But what shone through, for me, was the man’s determination to succeed (even if it required stealing ideas) and his envy of Wonka’s success. These were my starting points, and I knew I wanted my 100 words to be suitable for children, and (hopefully) fun.

In the end, “my” Slugworth is in rhyming poem form, which seems to fit as a Dahl piece, and the man emerged as an egotistical, somewhat deluded character who is rampantly jealous of Wonka. He feels hampered by people’s perceptions of him and his “sluggy” name, and can’t understand why his own disgusting recipes aren’t as successful as those of his nemesis. My made-up word, “slurraping” came quite easily as I wanted something to represent the sly, sneaky way other people perceive him.

26 also wanted us to link up with a child, or children, to illustrate our 100 words. I was lucky enough that Aberlady Primary School in East Lothian agreed to work with me, and despite not being an experienced workshop leader, was warmly welcomed into the school and given lots of support by the staff. Primary 4 and 5 proved really enthusiastic collaborators with lots of ideas, inventive creations, and a few complicated questions (there really isn’t a reason why Slugworth has to have eyes, can’t have robot hands, or wouldn’t have an insect’s body…), resulting in a magnificent 45 illustrations to choose from! It was a tough decision selecting just one, but I eventually chose a drawing by Oscar Mackenzie (from Primary 4) that best suited my take on Slugworth (I loved his sluggy body and movie-villain moustache).

This is the first 26 project I’ve undertaken where inspiration had to come from another author’s words, which was challenging and, to be honest, a little intimidating. It really pushed me out of my comfort zone. That, along with the (unexpectedly) creative burst that came from working with enthusiastic children, made for a really delumptious project!

Many thanks to Head Teacher, Mrs Currie, and all of the teachers and children at Aberlady Primary School. And thanks to Mr Dahl for inspiring me as a writer, and continuing to inspire generations of children in all kinds of different ways. 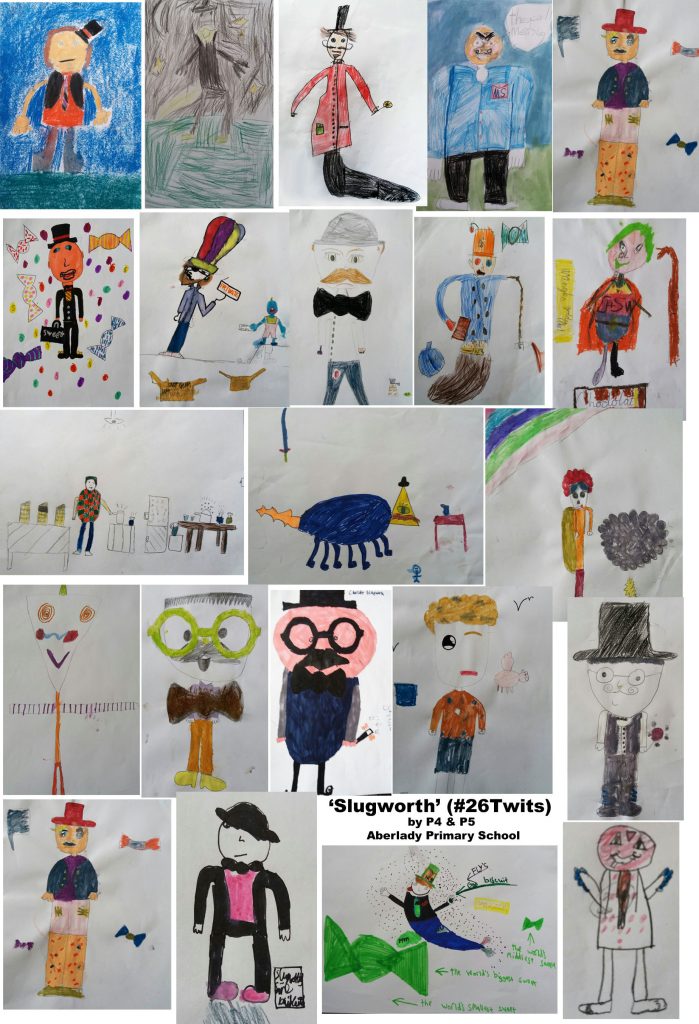 Absolutely phizz-whizzing illustrations of Slugworth, from Charlie and the Chocolate Factory, by Aberlady Primary School’s P4 and P5 classes.

One thought on “Slugworth”