Written by Mavis Gulliver, illustrated by Bronagh Newman
Inspired by The BFG

The BFG shook his head so hard that the breeze from his ears sent grandmamma flying.

“Most totally unpossible,” he said as he picked her up and popped her into his waistcoat pocket. “My dreams is for tiddly childers. They is not for oldy human beans with prunefuls of winkles and goldilocks as grey as bodgers’ bottoms.”

“Please,” she coaxed. “Just one phizzwizard for a box of peaches and a real live elephant.”

“You is tempting me,” said the BFG, “but no promises and no kiddling. I wants to see peaches and elefunts before I decides if they’s worth it.”

With grandmamma safely inside his waistcoat pocket, he strode across town and hopped over the fence into the zoo.

“There,” said grandmamma. “There’s your elephant.”

“That is NOT a elefunt,” said the BFG. “That is a pretend elefunt. I is wanting a truly elefunt that I can ride.”

“That IS an elephant,” said grandmamma. “It is the biggest animal in the whole world. But you are a giant and there are no animals big enough for giants to ride.”

The BFG stuck out his bottom lip. He scowled and he sniffed and tears of disappointment dripped from the end of his chin.

“I is discombobulated,” he said. “My hopes is smithered to smashereens.”

He crouched down and peered at the elephant. It rubbed its head against his knuckles, coiled its trunk around his finger and rolled on its back.

“Coochy, coochy coo,” chortled the BFG as he tickled its tummy. “You is nice and jumbly even though you is titchy as a squip-peak. I is going to be the only ever giant with a pet elefunt.”

He took grandmamma home and popped her through the bedroom window.

“I is thanking you muchly for my elefunt,” he said, “and I is leaving you a plentiful of goldenmost phizzwizards.”

He tipped thousands of happy dreams into his trumpet and blew them into every corner of grandmamma’s house.

“One by one they is coming out of crooks and nannies,” he said, “and they is enuff for your whole lifelong.”

With the elephant dangling from his little finger, he danced down the road.

“You forgot the peaches,” grandmamma called as she waved goodbye.

The BFG waved back. “You eatem,” he said. “I is lappy as a hark. I is dappy as a hutcher’s bog. I isn’t needing peaches now I got my ownmost elefunt.“ 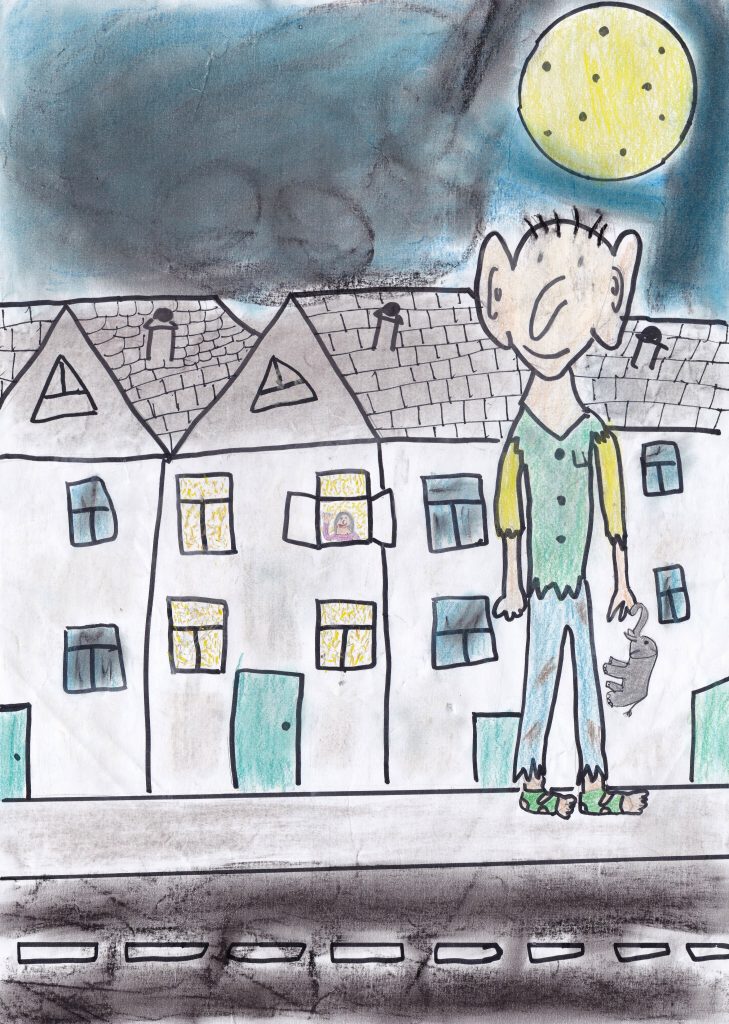 Prunefuls of winkles – as wrinkled as a prune

Discombobulated – disorientated – I may have heard this somewhere else

Titchy as a squip-peak – as little as a pip-squeak

Muchly – ever so much

Crooks and nannies – nooks and crannies

Lappy as a hark – happy as a lark

Read the feature story ‘Writing about the BFG’

3 thoughts on “Grandmamma and the BFG”