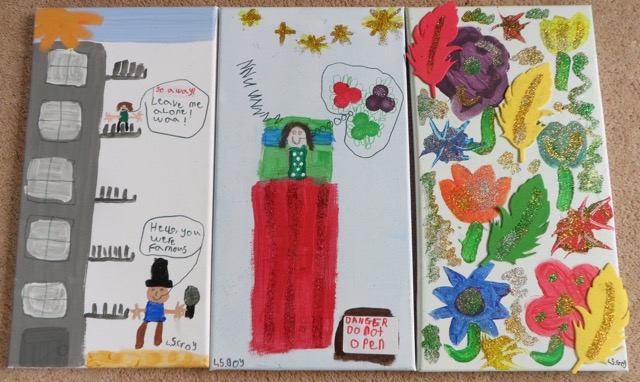 I was gobsmacked when a reporter appeared from “Where Are They NOW?” to interview mum about gardens. We lived eight floors up surrounded by concrete paths, parking bays, high rises and scraps of yellowing grass.

“Go away!” Mum shouted from the open balcony door.

I could see tears trickle down mum’s face. I didn’t know why she was crying and went to hug her.

“You were famous! Our viewers want to…” the reporter’s loud voice floated up causing Mum to storm onto the balcony.

“Leave me alonnnnnne!” she cried, clambering on the balcony railings, sobbing and swaying.

He skedaddled, leaving me to talk Mum down.

“It’s OK,” I said, hugging her, a tear dropping on my head as she stroked my hair. She revealed that when she was eight, my age, she’d grown a fantabulous garden with wondrous plants.

“Rodidodis rambuculated rampantly,” she said. “Spangalicious sprawled, spitting seeds at sunset. Silver Bells as tall as the Town Hall tower trembled and tinkled. Pretty Maids danced and dipped like ballerinas in the breeze. Cockle Shells croaked each full moon, cackling a cacophonous chorus. Tiger Lilies tangoed together, pouncing on slugs and savouring them. Spotted Snaglethorpe ladybirds leapt around.” Mum choked. “All gone! Destroyed when the council built the flats.”

She went to bed. It’s what she needed. Sparko in a moment. What she’d said explained a lot. Her change of mood from smiles to foot stamping. Contrary Mary, I’d heard at the school gates.

I loved her, wanted to make her happy. I had an idea. I ferreted in the box room for an old tin Gran had showed me.

It was full of paper seed packets Mum had collected. Gran had told me about “Guerilla Gardeners” and how they threw their “plant bombs”, onto bare patches of land to fill them with colour and life.

I became one. With Mum’s seeds and compost from the pound shop under my bed, I catapulted bombs from our balcony and “dropped” them to and from school.

Mum’s birthday arrived, I left chocs and a card in her room. A squeal wakened me.

“Oh! What a Morning Glory!” Mum was on the balcony.

“You mean glorious morning,” I yawned.

I ran to look.