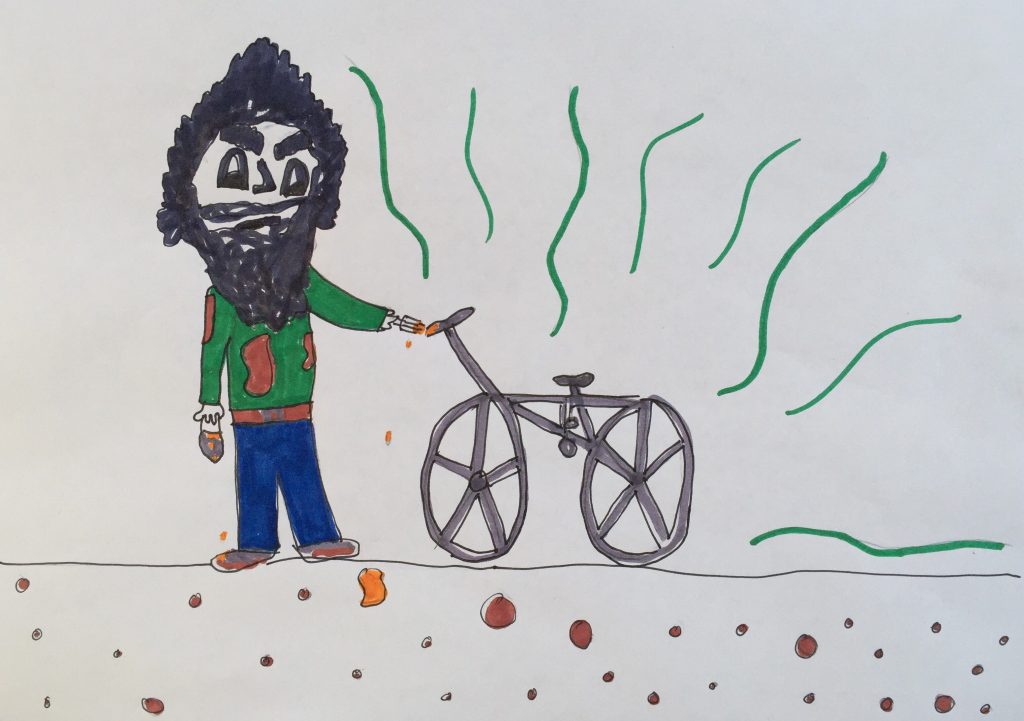 Written by Dan Germain, illustrated by Ruby Germain
Inspired by The Twits

As he oiled his chain with the greasy gunk from behind his ears, Mr Twit felt quite happy, which was most unusual. He couldn’t remember the last time he had been for a bike ride, and even the fact that it was a sunny day didn’t put him off.

The last time Mr Twit had left the house had been some time in 1980. Since then he’d been recovering from the Terrible Shrinks, gathering his strength and looking for his wife. Mrs Twit appeared to have disappeared, and Mr Twit could only imagine that the VILE OLD HAG hadn’t had the gumption to save herself from the Shrinks or those idiotic Muggle-Wumps.

Still, he didn’t miss her. Without her around, he’d been free to revel in his own filth for the last thirty-six years. He’d survived on and enjoyed a delicious diet of worms, mud and whatever poor unfortunate creature he could snare in his overgrown back garden. He washed his pants just the once, when it had become clear that they were starting turn into a sort of pant soup.

In short, he’d enjoyed being the filthy man that he was. It was making him feel quite GOOD. And he wanted to share that feeling with the world.

He walked to the gate with his bike, chain freshly ear-gunked, and off he pedalled, lungs wheehoozelling like a pair of rusty bellows. His knees clackled, the bike moaned and groaned under his weight, and fresh air whistled through his filthy facial fur.

Minutes passed, and Mr Twit found himself passing through a part of town he hadn’t visited for many years. Young people sat outside cafés, drinking strange green drinks, and seemed to be enjoying them.

“Mmm, pond slime,” thought Mr Twit enviously, and wondered if he should try one of these new concoctions.

It was only then that it struck him. All of these people – they all looked like him. They had straggly, unkempt beards and frightening hairstyles. They wore raggedy trousers and rode antique bicycles. And they drank those weird drinks, full of algae and grass clippings.

“What, in the name of all that is filthy, is going on?!” screamed Mr Twit inside his own extremely tiny brain.

“Everyone seems to have turned into me!”