Written by John Simmons, illustrated by Aimee Simmons
Inspired by The Twits

After the Twits got the shrinks, the Muggle-Wumps were happy to be free.

“Let’s celebrate,” they said to their bird friend who helped them escape from their cage. Monkeys don’t like being kept in cages any more than you would.

“We should go on holiday. How about France?”

“Ooo-la-la,” said the Roly-Poly Bird. “We should learn French – no good going and not knowing the language.”

He flew them on his back to Paris. They were enjoying  chocolat chaud and croissants in a café when they saw the sign: “See Paris from above. Best views from our chauderairee.”….

They went straightaway to buy tickets. “Quatre singes,” said the Roly-Poly Bird, hoping to get a reduced price for the four monkeys. The man in the ticket office just shrugged.

“My treat,” said the Roly-Poly Bird. They walked through the gate to where a scruffy-looking man was holding the rope attached to the balloon’s basket.

“Hop in,” the Roly-Poly Bird led the way. Soon they felt the basket move under their feet as the flames heated the air in the balloon. They started to lift off the ground. Looking down, the man holding the rope, with his beret pulled low over his head, looked strangely familiar. The Muggle-Wumps laughed: “Looks like Mr Twit!”

Up they soared. Paris was all around them down below. There was the Eiffel Tower, the Arc de Triomphe, Notre Dame Cathedral. The Muggle-Wumps were having a high old time jumping around. The basket shook from side to side. They were going higher and higher, and the Roly-Poly Bird noticed that the man holding the rope had been lifted off the ground and was swinging below them. He did look familiar. It was Mr Twit – Mr Twit unshrunk.

“Non, non, arrête!!” squawked the bird at the Muggle-Wumps, forgetting that they didn’t speak much French. They jumped and swung all the more, enjoying themselves. They didn’t realise that a flame from the chauderairee was now burning the rope that Mr Twit was holding on to.

The flame burnt through the rope and they all watched Mr Twit fall from the sky, landing with an enormous splash in the River Seine.

“Adieu,” screamed the Muggle-Wumps as the chauderairee took them back across the channel towards England. 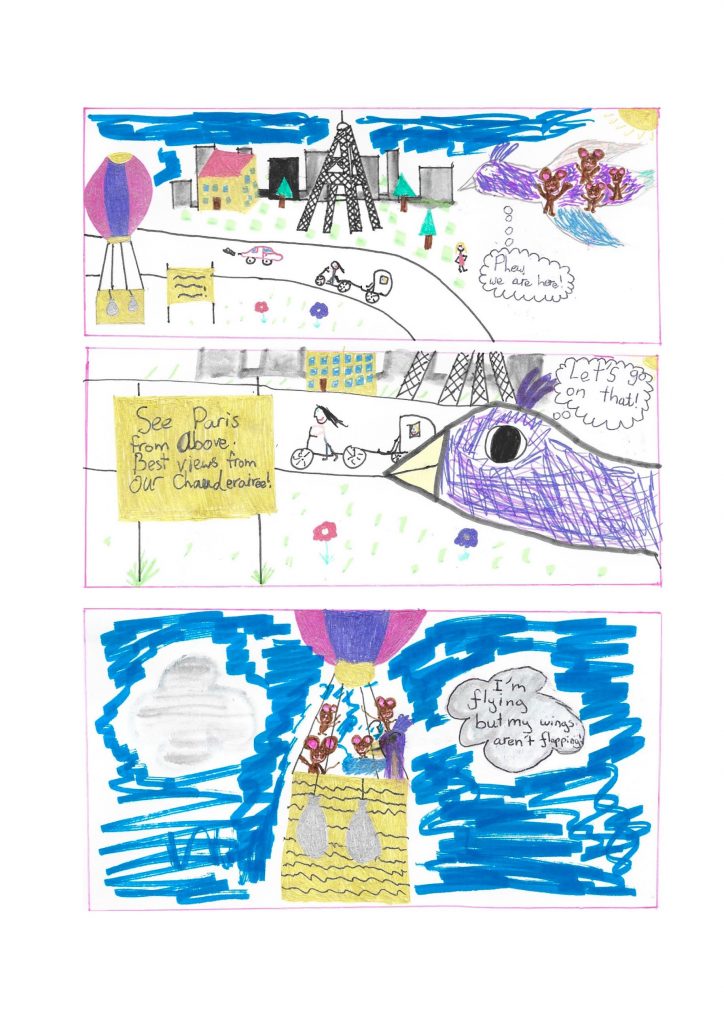 Read the feature story ‘Aimee and the Twits’