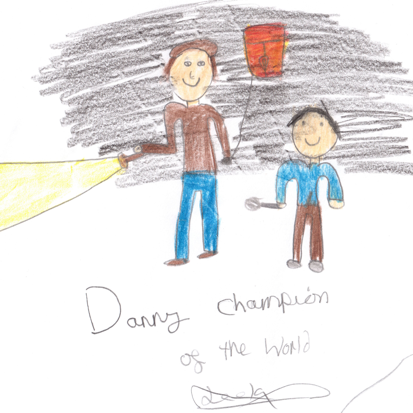 Written by Gita Ralleigh, illustrated by Leela Delamere
Inspired by Danny, the Champion of the World

Danny’s father returned from the war, lost a wife and gained a child. Like his gypsy caravan, soft-lit in the darkness, he’s an adventurous soul who stays in one place: dispensing petrol, tinkering with engines and inventing go-karts, fire-balloons and big friendly giants for his son.

As night descends, he quietly leaves their caravan, alone. When the yellow moon rises and the owl makes its low, eerie hoot, he walks to the woods, each footfall taking him further away from Danny – and closer to his secret.

One night, he shares his secret with Danny, blue eyes squinkling.