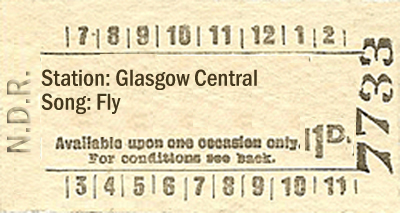 [The construction of the Caledonian Railway Company Station (1873-79) erased Alston Street from the map; it had been an integral part of Grahamston village for over a hundred years. Most present-day commuters hurry through Glasgow Central unaware of the hidden memories & stories beneath their feet.]

He stood inside the charred theatre, the backstage area of blackened-wood and silk costume remains. The New Concert Hall had been due to open last night, but a protesting mob had torched the stage before they fled. James sighed at the damage done.

The theatre company now planned to open their interpretation of ‘The Citizen’ tomorrow night. James glanced at the arrival of makeshift costumes and began again to mentally rehearse his lines. He looked up at smoke-tinged plasterwork; he smelled the burnt ash, he remembered his characterisation, he mused on his face make-up, he smiled. It would be.

In 250 years or so from now, someone might just remember this opening performance.

“I’ve fallen far down the first time around,
Now I just sit on the ground in your way” **

Robert had lost account of the hours since setting foot in Ancell’s Bar that afternoon. Wullie had been pleased to see him as passing trade had been light so far this week. The hostelry, normally bustling with workers from the Milton’s Brewery or the grain stores, had barely seen more than 10 locals all day. Even the weary-eyed carriage travellers seemed to have deserted Grahamston. The summer rains poured down, his trousers wet from the gutter-running rivulets as he lay in the street.

You see, despite the Pale Ale numbed blur, he still felt pain and loss inside. Today was the seventh anniversary of that dreadful day in 1848 when he had to pull the broken body of his brother Bert from the collapsed ruins of Wilson & Company’s Sugar House. He had been on his way down to the Alum warehouse on Union Street when he heard the low rumble, building to a crashing cacophony of falling masonry intertwined with human screams. He had frozen for a few seconds, before looking up to the clouds of mortar dust billowing upwards from Alston Street. He remembered little else over the next few minutes until he stood over the pale crushed body of Bert, his own fingers bloodied from wrenching away the stones and timber beams that had broken his fragile brother.

Autumn rain. It soaked his hair, his skin, his shirt collar. It washed the tears from his face. He groaned in anguish, pausing only to feel the brief sharp contact of a merchant’s heel on his resting hand. Christ, he missed Bert. He missed his calming words and wicked smile.

The ruins of Wilson’s crumpled factory just up Alston Street seemed to mock him through the autumn-misted rain. He raged at the sodden dark clouds above and let his drunken tears flow hard.

“I’ve fallen so far for the people you are, I just need your star for a day” **

The unaccompanied Gaelic voices soared in Domhnall’s ears. Lilting lines of notes, taking him back to Borghasdal, his place of birth on Harris.

You see, he hated living in the city. He hated the overcrowded buildings around Grahamston. He hated the stench of industry and domestic refuse. He had come to Glasgow for work. His position at the Gaslight Company on Alston Street directly behind the church was under threat; rumours were that the owner was going to sell the premises to the railway company.

So he thought of standing above his home township, with his back to the peat slopes of Roineabhal. Shutting his eyes, he could imagine looking south-west across the sun-dappled waters towards North Uist, or south-east across the Minch to the glowering Cuillins on Skye. He wished he was a herring gull, soaring over the island landscapes of home.