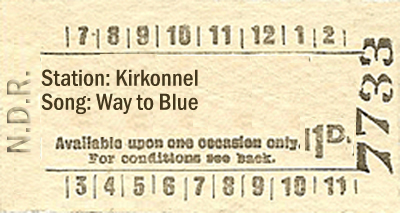 Kirkconnel’s bard sang progress, engines’ strength
made greater by the discipline of rails,
his rhymes and grammar sound, his metred length
of line hard-fixed as ever was with nails.

Nick Drake sang questions, ways lost, light flown, blue
of waves and sky the video shows grey,
gates waited at in hope of looking through,
a plea for somebody to show and say.

Kirkconnel’s bard praised Whitman’s free lines, praised
his fellows, wrote in voice of the bereaved
mothers. Read in our day, is he appraised
with more along the track than he believed?

Would he have prayed, trusting in God to hear,
that Nick Drake’s heaven-signal stood at clear?