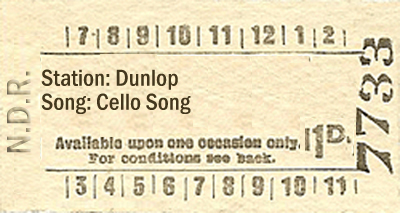 Lend a hand and lift me

I don’t know why I looked up. Perhaps it was on reflex; the train pulling into an Ayrshire station I’d never seen before, an instinct of nosiness. Maybe it was the need to rest from the concentration of work or be impressed again by the dramatically low clouds. It could even be that I subconsciously picked up on the unlikely station name, my curiosity piqued. Dunlop? Isn’t that a Midlands thing?

It doesn’t matter. Unless it does.

In any event, what I remember is my carriage coming to a halt almost alongside a white staircase railing. Freshly painted, looking curiously dainty, I allowed my eyes to drift upwards. At the top, the staircase abutted an unyielding granite railway bridge. No frills. Just enough clearance for the train and no more. No ornamentation of any sort. A Calvinist railway bridge if ever there was one, and somewhat at odds with the delicacy of the railings. I had just enough time to ponder on the brutal collision of styles before becoming aware of a person standing at precisely the point where iron wrestled stone.

He – I think it was a he – looked down as I looked up. Tall, insubstantial, and perfectly still. It didn’t feel as if he was looking at me, so much as through me. His face was strange, other worldly, benign but detached. I looked harder. Now it felt as if I was looking through him. He turned, and then, as if in a trompe l’oeuil, he climbed up. I hadn’t realised the stairs continued, and having often come back to Dunlop to check subsequently, I know that of course they don’t. Nevertheless, upwards he walked, at one point pausing to look back. There was the hint of a sympathetic smile playing on girlish lips before he turned and continued climbing.

And then it was over. Nimbus clouds swallowed him. I searched for his shape in the shifting clouds, seeing what I wanted to see. But he was gone.

The train lurched out of Dunlop station. I looked back at my laptop, the patient cursor blinking away on the spreadsheet in front of me. My life was here sure enough, the solid world of expectations and deadlines. Staring at the screen, as real as he had seemed, his disappearance was more real.

And yet. In these persistent moments of recall, fuelled by return visits to Dunlop, such as this instant, right now, standing on the platform looking up at the point where the railings meet the bridge, it’s the uncertainty, the liminal state, that excites, that pulls me back towards him, towards up, towards the possibility of possibility.