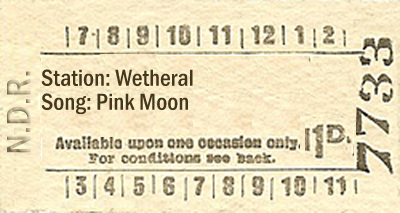 There are pinks in the garden, and phlox. Flowers that flower at night – moonflowers with their open throats – and those that are strongly scented by night, honeysuckle, nicotiana. It’s what he asked for, the only thing he asked for, to be buried in such a garden. He wanted people to commune with him after dark.

“I’ll get lonely at night,” he said. That’s what he hadn’t been able to deal with, night. The long arms of it. The way it crawled up his spine seeding electricity like glow worms. The way it hid from him what was round the corner. The night he missed his footing on the platform edge, the full April moonlight poured into the steam as the train pulled in, colouring it a faint pink.

His garden lies outside the old station at Wetheral, below the viaduct that crosses the Eden, marking England’s first railway accident. These days the booking office is shuttered up. The station runs unmanned.

Tonight the full moon is free of clouds. His granite tomb shines and the light itself seems alive.