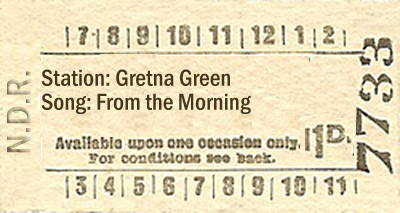 Now we rise
And we are everywhere

Sailing downstairs to the Northern Line, I get off at Gloucester Road.
It might as well be Gretna Green, a stopping off point, far away.
And I could be anyone, eloping with guitar in hand, to make a record.
John said the studio was free after 11pm. I know where I’m heading.

I once told myself that I’d never sing for my supper.
But here I am, early and ready. On the corner of Old Church Street
I sit down, get out my guitar, and take it all in. Looking up,
there’s a pink moon. Yes, a pink moon! And it seems so clear.

I ease into the intro, my fingers picking and plucking.
For the sound of a busy place, I’m adding to the range of a London street.
“Nice tune.” I look up and a guy’s smiling at me, a girl on his arm.
I sing to her: “A day once dawned and it was beautiful.”

A few others have joined them, silent, attentive, still.
Despite the hum of traffic and the buzz of good-timers,
I am the centre of attention. Money bounces into the guitar case.
“Then the night she fell, and the air was beautiful.”

There’s now a crowd. It’s a scene. Standing room only.
As two revellers pass, they’re shushed into silence.
Traffic is stopped. Saturday night on the King’s Road.
Not a sound to be heard. Everything stands still.

More people join. Raked seating is hastily assembled.
Those at the front sit crossed-legged on the pavement.
There’s no late admission. Pedestrians are diverted.
An ambulance turns its siren off, blue light throbbing in time.

A PA system is rigged up just in time to catch my line,
“So look see the days, the endless coloured ways.”
A frenzy of fireworks goes off perfectly framing the moon,
shining a soft, pink spotlight on me, washing the stage.

When I sing, “And now we rise and we are everywhere,”
the audience stands, as one, arms aloft, lighters lit.
“And now we rise from the ground” and, waiting for their cue,
they float, levitate, two by two, up into the weightless night.

Music promoters agree conditions and riders with my manager.
CSN&Y fly in for the final part of the show. Joni is stage side.
We connect as I sing: “And see she flies, and she is everywhere.”
Joni sings back, “See she flies all around,” her arms outstretched.

October is transformed into summer, a balmy, sultry evening.
“So look see the sights, the endless summer nights.”
Married couples come on stage, fresh from their weddings,
wrapped in Gretna Green banners and Scottish flags.

As I begin the final line, a thousand voices sing along,
“And go play the game that you learnt from the morning”
I accompany them as they meander through the final line
precisely in time, a sudden splash of polyphony at the end.

As the guitar slowly fades away there’s a sated, satisfied hush.
I lean into the microphone, “Thanks. Good night. Until next time.”
“Good night Nicholas Roderick Drake. Until next time.”
I close the case and wander down to the studio. John’s waiting.