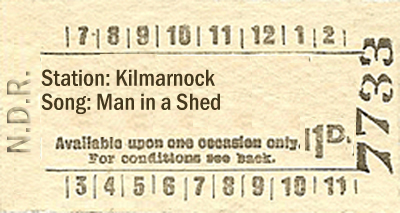 “Come away with me,” he said and the first thing I thought of was that rubbish Norah Jones song which probably wasn’t the whole feeling he was trying to evoke. I didn’t have him down for a Norah Jones fan, like maybe he had a crush on her, but secretly and he’d never buy an album he’d just put it on spotify occasionally and feel a bit guilty about it.

He had a lot of vinyl.

You might think a romantic gesture could only go one of two ways: the thrilled acceptance or the crushing rejection, but when he said it, when he proffered his flowers and batted his eyelashes like a camel with sand in his eye and gestured towards the garden, I just didn’t quite know what to do with it.

(Truth to tell, if it’d not been for the flowers I wouldn’t have known it was a romantic gesture at all. That was just my best guess. Seeing as he’d invited me round for dinner and seemed insanely nervous as he cooked me noodles. He burnt the garlic and it was a massive disaster. I said it was delicious, of course.)

The silence was becoming tense now, as we stood in his kitchen in a tangle of uncertainty and confusion, because we’d been friends for 30 odd years and this was something new.

“I mean, come this way,” he said. “Please?” And he blushed. And I blushed because his shyness his suede jacket his habit of fiddling with his sleeves suddenly seemed the most endearing things in the world.

“Yeah,” I said. “Ok then.” And I followed him. Out into the garden. Out to the shed. He waved his arms around in a way that meant I should go in first and if I hadn’t known him since St Columba’s primary I might have worried that there was going to be a head in a box but I remembered when he wet himself in class 3 so I thought the chances were low.

And so I opened the door.

There were fairy lights all strung up. An ancient record player. He shuftied past me and put the needle to the record. A song came on I didn’t recognise. He took down a bottle of Johnnie Walker from one of the shelves. Poured himself a glass, passed one to me.

And I wasn’t in Kilmarnock anymore. Not Kilmarnock now, anyway. I was thinking of that student party all those years ago. I was remembering the moment when we nearly kissed. Nearly. Not quite. The closest we ever came to us. And I was wondering why we swerved it.

“I like you,” he said, bringing me back to the shed – to the fairy lights, to the music, to the brilliant awkward weirdness of it all. And I blushed, again.

“You could have just asked me out,” I said, trying to pretend my heart wasn’t about to beat its way out of my chest.

“It’s not been the best of times. I didn’t know if you’d…” he trailed off.

(Not the best of times? Scottish understatement at work. He’d lost his job at the bottling plant. His wife had left him. I remembered her from school days too. Queen bee. Quietly dictatorial.)

“No. Not Norah Jones.” He smiled. Coughed. Blushed again.

And so we began.