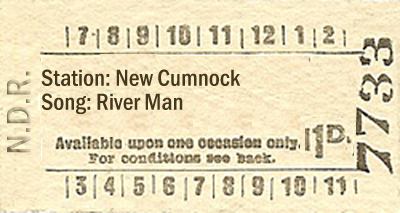 Leaning on the bridge where the Nith and the Afton met, he stared into the moving confluence.

“Aye,” he said, “they come and they go. By foot, horse, water and train they’ve travelled in and out. The mighty and the miners, the high and the low. It’s ever been the way of this upland place. There’s many a story, going way back.”

He looked at me sideways.

“You know the story of Betty the Beautiful?'” I shook my head, smiling, wanting to encourage him. After all, stories were why I was there, what I was collecting.

“No?” Raising an eyebrow, his brogue deepening, he continued.

“She lived with her father in one of the bothys on the edge of the Nith – this was the time of Black Bog Castle mind – they got by on their small harvest, smoking fish for sale and pocketing the odd penny ferrying folks across the river.”

“One day she was bathing in a secluded pool in the Afton – it was more wooded here then – when she was spotted by sons of the Earls of Dunbar and March. They were smitten: her white skin glowed through her dark tumbling tresses, her body trembled of the verge of womanhood. Both boys determined to have her. Not as a wife, ye ken, but as a plaything to while away the hours. It was ever thus between the high and the low. Centuries later when the train came through, the Duke of Buccleugh had the same high-handed manner. Nothing was going to disturb his lilacs -”

I interrupted. I knew the story of how the Duke’s influence had caused the line to create the Drumlaing tunnel at massive cost. I knew about how all trains had to stop for inspection, its importance for the mining and coal interests. A railway buff, I had the line’s history by heart. I’d travelled by train to the town. I’d even met the present Duke (who I’d mistaken for the gardener, his shabby clothes covered in dirt) when I’d gone to the estate’s café after a ramble. I wanted the untold tales, the hidden histories. I urged him to return to Betty.

“All in good time. Where was I? Aye, the sons. They agreed to independently seduce her and compete to be the first. Each day, they lay in wait for Betty when she was out alone, ready to impress her with their wit, their wealth, their worldly ways. She was assailed as Spring turned to Summer with soft words, small gifts and longing looks from the beseeching boys.”

“There was no mother to guide her, no woman nearby whom she could consult or confide in. Her father’s time was taken up and down the Nith trapping the returning trout and getting them ready to smoke.”

“Surprised one day, she found herself taken. Bewildered, Betty stayed silent. Only when her kirtle began to tighten did she have an inkling of the new life within her. Discarded by Dunbar, mocked by March, distressed and distracted she prayed for the babe to disappear; but the movement of a kicking foot had her wishing otherwise.”

“Her bloom faded as her waistline grew. Her father saw the paleness but not the pregnancy; to him, she was ‘filling out’ as women did. Dejected, despairing, on her walks along the river Betty heard the boggarts calling, voices bubbling from their watery lairs, whispering words of freedom.”

“Soft rain fell that moonlit midsummer evening, swelling the Nith. The river man took his nets to fill, as he did each year, the smoke-house ready for his haul. This time he netted his daughter, eels snared in her frond-like tresses, her worry and pain washed away with the river’s flow.”

Falling silent, we gazed together at the river’s shimmering surface, sensing sadness in every swirl and eddy.