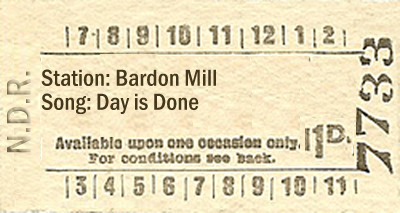 The Tattooed Giant of Bardon Mill

It was over even before it began.

“Did you see?” The voice was deep enough to shake the pavement.
Lewis gaped at the tattooed giant, naked from the waist up in the biting wind, all flour bag belly in a roadside chair. The ink tracks that ran beneath his skin etched pictures within pictures within pictures; maps, houses, railway lines, tableaus of feasts with cakes and hams, street fighting rebels, cartwheeling children, bewigged judges, battleships on the high seas and a woman in a pale coat with a furrowed face and long dark hair. He’d always been here, outside the pub with a tiny pint pot in his mighty fist but he’d never been known to talk.

“Yes” said Lewis.
“You only see if you believe” the giant went on. “If you don’t believe you cannot see.”
Lewis nodded, unsure of where this was going.

“But you saw” said the giant.
Lewis shook his head and the giant leaned forwards and blotted out the sun.
“Tell me.”
Lewis couldn’t. How do you tell someone you just saw their tattoos spring to life?”
“It was just a trick”
“Do I look like a magician?”
Lewis had to agree.
“So what, young snapper, did you see?”
“Chimneys and smoke and a woman. Steam trains… I don’t know!”
The giant smiled a smile of tomb stones and razor blades and began.

“The old pottery of Bardon Mill. Four square chimneys ranged against the sky and the fire in the open grate. You saw a woman with burnished chestnut hair. You saw the engines throwing sparks into the midnight rain.”
“Ghosts?” said Lewis.
“Memories” said the giant.
“Not mine.”
The giant shrugged “a dream then.”

“I’m going” said Lewis but the giant reached out a mighty calloused paw.
“Take this.”
And he opened his fist to reveal a broken watch. Lewis turned it over. Verdigris cemented the crown-wheel solid. The back was worn down to the base metal.
“It’s ruined” said Lewis.
The giant shrugged. “It fell in the sea.”
Through the misted glass you could just see the frozen hands.
“12 minutes past 7!”
The time Lewis Katz would never forget. He looked into the giant’s tiny blinking eyes.
“The time she told me.”

And so it was; the time Lewis Katz’s mother had told him she was giving him up, because she didn’t have time.

“How did you know?”
“I know that you can only see what you believe.”
And the giant leaned back and took a sip of black beer.

Then it began again. His tattoos awoke. Children played in a garden on his forearm. A train raced across his shoulders like a snake, and a woman with burnished chestnut hair looked up to the sky.

“Who is that?”
“I thought you were going.”
“I was until you gave me this watch.”
“ Let me see.” He brought it to within an inch of his eye. “What is the time?”
Lewis checked his phone
“25 to 3.”
“So it is. I said, you can only see what you believe. You believe she didn’t have time. I remember she didn’t have time to tell you all she wanted to.”
“You remember?”
“She didn’t want to leave you lad, so she asked me to watch over you. So that’s what I do. I drink coffee…” He downed the pint in less than a second.
“Yet you see a drunk”
“So if I want her back I just have to believe she’s back?”
The giant laughed so hard the chair collapsed and he hit the ground with an earth quake. “That would be madness!”
“Then what?”
“You can believe she took her time and spent it somewhere else. Or you can believe like me, she fought for time but time was taken. That her day was done.”

He flexed his blue marble chest and picked himself up.
“Look at you, in your thick coat and your hat and your scarf. It’s always summer to me young snapper.”