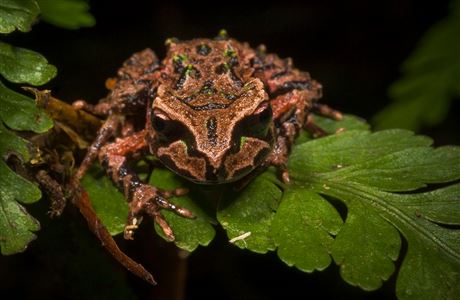 A leap of faith

Would you please
listen.
If I tell you that I have no need for grand mansions
Or notions of self-importance.
No hankering for crowds nor limelight.
I am content with being still.
The epitome of mindfulness; c’est moi.
Some say I’m one out of the box.
That on the subject of family, I can trace mine back to the beginning of things
And from mine, I’ll never stray; I have no interest in playing the field.
If I tell you that I’m not long for this world,
Would you overlook my insignificant stature,
And kiss me?
Would you,
please?

These frogs have history. In fact, they are called ‘modern day dinosaurs’ as their fossils are remarkably similar to those of dinosaurs of 150 million years ago. Archey’s frogs are a fragile link to our past.

There are between 5,000 and 20,000 of these frogs in New Zealand (land of Jacinda and virtually Covid free), specifically in two damp, forested regions of the North Island. The generous photographer James Reardon who is sharing his portraits of Archey for this project tells me that these frogs are ‘cryptic’ making it frustratingly difficult to extrapolate numbers. What’s more they’ve recently discovered that mice find them quite delectable.

Therefore it’s not surprising that in the amphibian category this little creature has earned first place as the world’s most Evolutionary Distinct and Globally Endangered (EDGE) amphibian species.

They are tiny, between the size of a fig and an apricot, painted in jewel like colours of bronze, green and red. Their skin patterns are unique identifying markers; no two Archeys frogs are the same. Yet the males and females appear anatomically identical.

Their Australian counterparts are the noisy ones; Archeys frogs are pretty quiet, though conservationists have heard them squeak in a rather un frog like way.

Despite their preference for the damp, Archeys frogs don’t live in water, nor do they have tadpoles; the female lays eggs in a little nest which the ‘father’ guards. The froglets climb onto his back and remain there until they’re developed enough to make their own way in life. They won’t travel far though; sitting for hours, days, weeks at a time in one spot, and not moving much further than a square metre or so in their three to four decade long lives.

No wonder they’re sitting ducks for ground based predators. As well as tramping boots, hunting dogs, and adventurous runners. Scientists report that Archey’s frogs are also fodder for kiwis (the NZ native flightless bird) and bats, as well as rodents.

They are also prone to a fungus that will further reduce their population. This is why a form of ‘border control’ has been set up in two protected locations so that visitors can’t bring in any infection on boots, tires, or paws.

Archey’s frogs are considered barometers of nature, their skin sensitive to subtle changes in the surrounding environment.

A final fascinating and topical fact; frog skin is used in lab research, and the development of antibiotics. Perhaps we could posit that some of these historic creatures have ‘skin in the game’ when it comes to the development of a certain vaccine. How precious are Archeys frogs now?