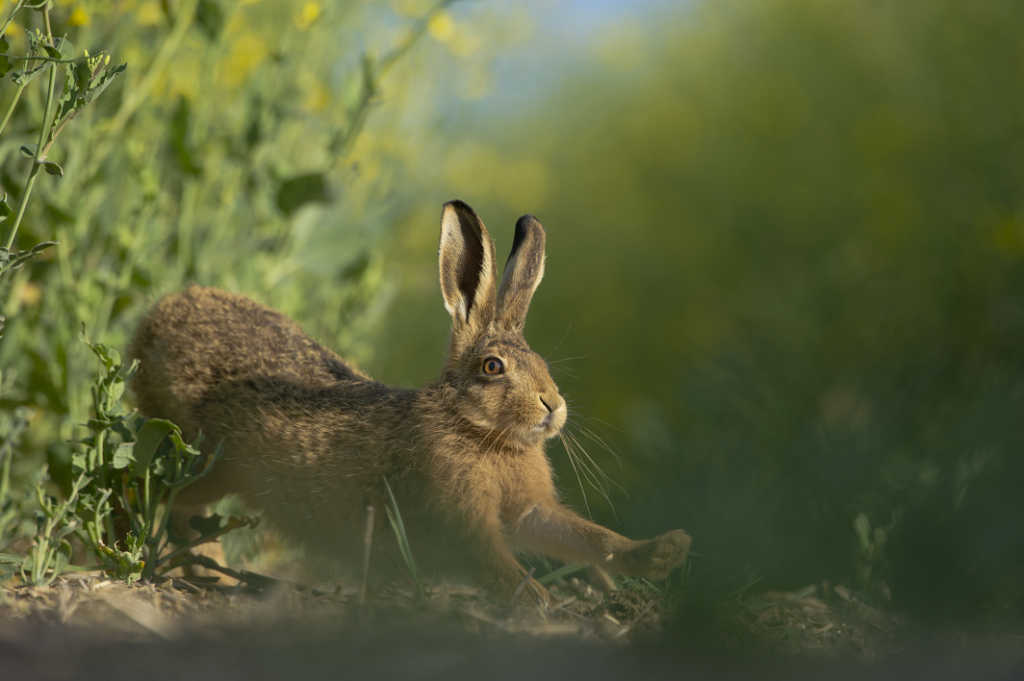 Deepen the dark sky and frame the skeleton moon.
The meadow below is silent.

Hidden within, a delicate pulse of life.
Burst of springtime. Blossom of fur.

Wide-eyed and watchful, as hands reach through the night
with bloody efficiency.

A step breaks the silence.

The grass shudders and parts.

The path ahead vanishes.

Nowhere to hide, that delicate pulse of life.
Springtime is torn open, and the blossom is scattered.

The meadow is silent again,
and the skeleton moon
watches

as we deepen the dark.

A prayer for the hare

There are few things on earth that don’t eat hare.

Predators pad through the woodlands and mountains. Prowl the open country and let loose their shackles. Thunder down from above, snatching at heels. It’s been that way since the hare first arrived on the scene, tens of millions of years ago, already running. It’d be enough to put anyone on edge.

Even more so now that one group of predators has evolved into something no creature can outrun.

Romans first brought the hare to Britain, and at first we wouldn’t have dreamed of harming them. Unfamiliar and objectively stunning, the hare became an object of fascination and love. We know this because we’ve found them buried, oh-so-carefully, cradled to the grave.

Their ornaments seem to associate them with a goddess – some say Freja, some Eostre. Experts say it’s neither. Whoever she was, we’ve forgotten her now. Eostre is a good proxy, apparently. A goddess of fertility and springtime and light.

But it wasn’t long until we considered that a dent in that abundant population couldn’t hurt too much. So we put aside our praise of the hare’s fertility and turned to death to exert a bit of control. Burials vanished, and bones were scattered fireside.

It wasn’t long after that that we came to worship convenience over any turn of nature. So we burned coal to keep off the cooler springtime nights and that beloved season became stormier, more volatile. And the little leverets, born above ground, were left exposed to its wrath.

Our last tenuous link to the hare was broken when we put out the light. We dug up the meadows, once abundant with food, and sunlight, and room to run the way hares are born running. And the pastures became property, the food became farmland, and tall cities cast shadow over the land.

In the last 100 years, 80% of the native hare population has vanished. 97% of our meadows are gone. 70% of the land is farmed. There is no legal protection for the hare.

No wonder we’ve chosen to forget the goddess we saw in the amber eyes of the ancient hare. We’ve turned her into a trespasser. She’s not welcome here.

Today, hares escape our pistols and poison and pets through any opening left to them. Usually, it’s through a dark field under a full moon. A moon on whose face you might spot what people for millennia have seen: a hare. Standing upright, patient and alert.

Watching, perhaps, for what we’ll do next.