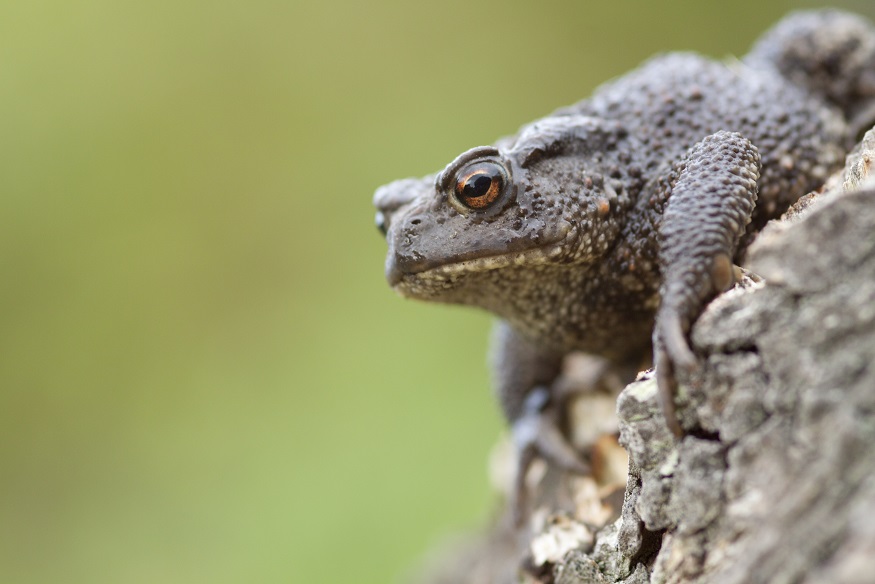 Knot so common after all

Toothless heads nuzzle through damp, rotted leaves to emerge,
Primed and ready for the annual pilgrimage
To ancient birthing pools, where past and future will meld.

A knot of urgency, justified in a world that mutates
During each winter sleep, breeding amorphous foes
Ignorant of lives lived in woodland walkways and petri ponds.

Awaiting cover of dusk, naïve to its hidden hazards,
The not so common [   ]’s goal is
Rebirthing and renewal at all costs. Spring awakens them.

The “not so common now” toad

Confession time: when I signed up to 26 Wild, I hoped for a creature with ‘cute’ appeal. A hedgehog, squirrel or puffin would have fulfilled the brief perfectly. So, when I received news that I’d been paired with the Common Toad, I was momentarily deflated. That all changed however, when I learned that its scientific name is ‘Bufo Bufo’. What a fantastically evocative and onomatopoeic name! How could a creature with such a name fail to be interesting and attractive?

Well, it didn’t. I was attracted and enchanted very early on and was therefore disappointed to find that, living in Northern Ireland, the chances of my ever seeing a ‘Bufo Bufo’ are zero. We are completely toad-less here – something I didn’t know until undertaking this project. I learned a lot.

Like the fact that numbers of the Common Toad have declined in the British Isles by 68% over a 30-year period up to 2016. More than two thirds of these ugly, beautiful, magical, amber-eyed creatures have been lost to a mix of environmental factors and urban sprawl.

We’ve inadvertently destroyed habitats as we’ve cleared woodlands and ponds from our landscape to make way for buildings, roads, ‘infrastructure’. In so doing, fragmenting the habitats of these gentle pest-controllers and making it difficult for them to survive.

It’s not for the want of trying on their part it has to be said. At one point my centena looked set to be orgiastic-ally themed, as everything I read suggested the Common Toad has only one thing on its mind upon waking after a winter hibernation. Images of females being set-upon by groups of males all clinging on for dear life, determined to fertilise her strings of eggs, abounded in every medium I explored. Enjoyment seemed superfluous and rather a dogged determination to procreate and continue the species was clear after a while.

I’m not alone in being enchanted by this fairy-tale villain. There are a growing number of loyal ‘Toad Patrols’ around Britain. These otherwise sane (presumably) humans leave the comfort of their warm beds on cool Spring nights to help the single-minded amphibians reach their breeding ponds in safety; in so doing, saving thousands that would otherwise fall victim to unwitting drivers.

‘Common’ is an unfortunate misnomer that devalues how precious these creatures really are and makes us care less about their future. Perhaps a rebrand would help. Bufo Bufo anyone?