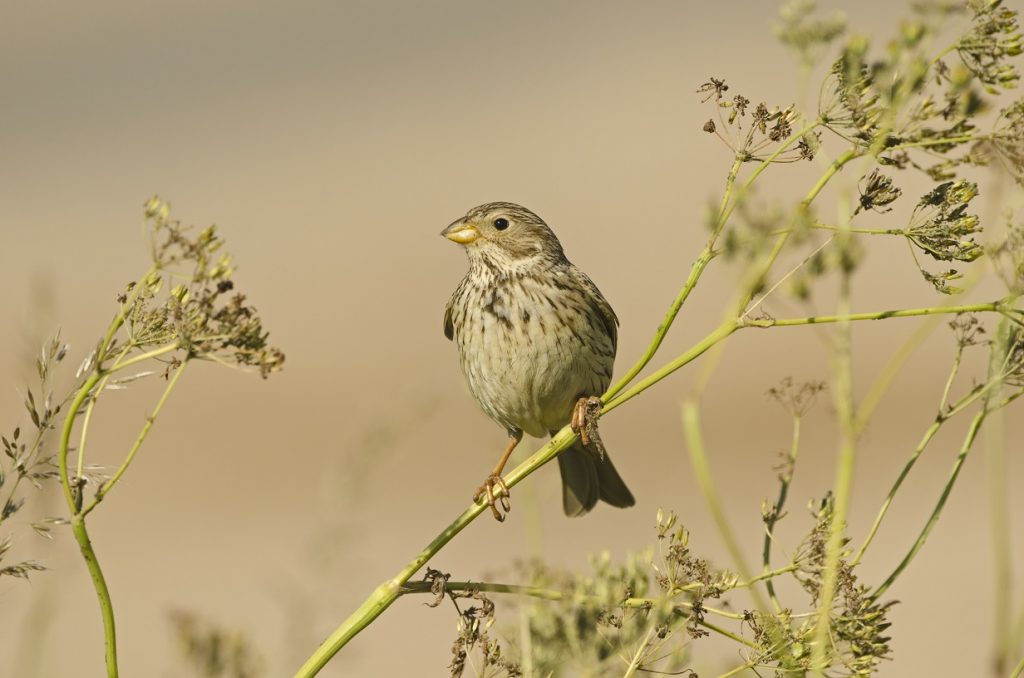 An everyday sound, a reassuring clink of presence, a jangling challenge, this dowdy minstrel claims the land for his own. Sturdy and sepia-tinted, dressed in dark furrows, umber streaks on tan and wheat, [   ] watches his mate tend eggs of baked earth and shadow in a cup of grass.

Workaday gleaner, once common companion, changing fortunes reflecting customs of farm and field. Gone from most in the span of one lifetime.

The receding tide of its presence carefully recorded,
fading into history in the lands of legend,
keys stilled, leaving an echo
of what once was
an everyday
sound.

More about the corn bunting…

Family days out were mostly walks in the countryside. Dad, striding ahead with heavy binoculars strung around his neck, hoping to spot any birds before they spotted us. “Shush you lot”, he’d say, “there’s something up here”.

I was proud to be trusted with the binoculars, treetops brought into sharp focus. “I can see it”, I’d pretend, the bird in question long gone. Easier just to look and listen as we walked along, Dad  calling out a litany of intriguing names. Bright yellowhammers in the hedge, swirling linnets startled from the field, the distant drilling of a woodpecker.

Years later, I pick up that lost hobby. Passing through the silent landscape, I wonder at the difference. Where is everything? Am I just a terrible naturalist, were there really so many birds on my childhood walks? He’s not here to ask, the proof of my memory slipped into history.

Researching my species, I discover the truth of it. Page after page of sweeping loss has been recorded by patient watchers as corn buntings receded from western coasts, then whole countries. At first “abundant” and “common”, becoming “a rare visitor”, before they “vanished” and finally became extinct. Lost from Shetland, Northern Ireland, Wales in one human generation.

Their ordinariness struck me – thriving alongside the farming of crops that provided our everyday sustenance – wheat, oats, barley, rye. Brown, plump, sturdy birds, taken for granted, unremarkable amongst a pageant of showier birds. Even their song is universally compared to a shake of those most everyday items, a bunch of keys.

This earthy plumage hides them as they feed on grain and seeds. The female, alone in a hair-lined grass nest, blends into the ground. Stay-at-home birds, they don’t travel far, the males even have different dialects to those just 30 km away.

They have been part of our lives since agriculture began, locally named the common bunting, the cornbill, the docken sparrow and the fat bird of the barley. Flourishing where cereals were grown, their fortunes are linked to the way the land is farmed. Different crops and more pesticides mean less food for adults and chicks. Nests destroyed by early harvesting compounds the devastation.

To turn the tide, we need a friendlier form of farming, helping farmers to help nature, so that birds can feed and nest unharmed.

On a clifftop footpath I chat to a binocular-draped stranger, eager for guidance. “Did you spot the corn-bunting” he asks, “in the hedge, top of the path? You’ll hear it.”

I did, it was amazing. One corn bunting.