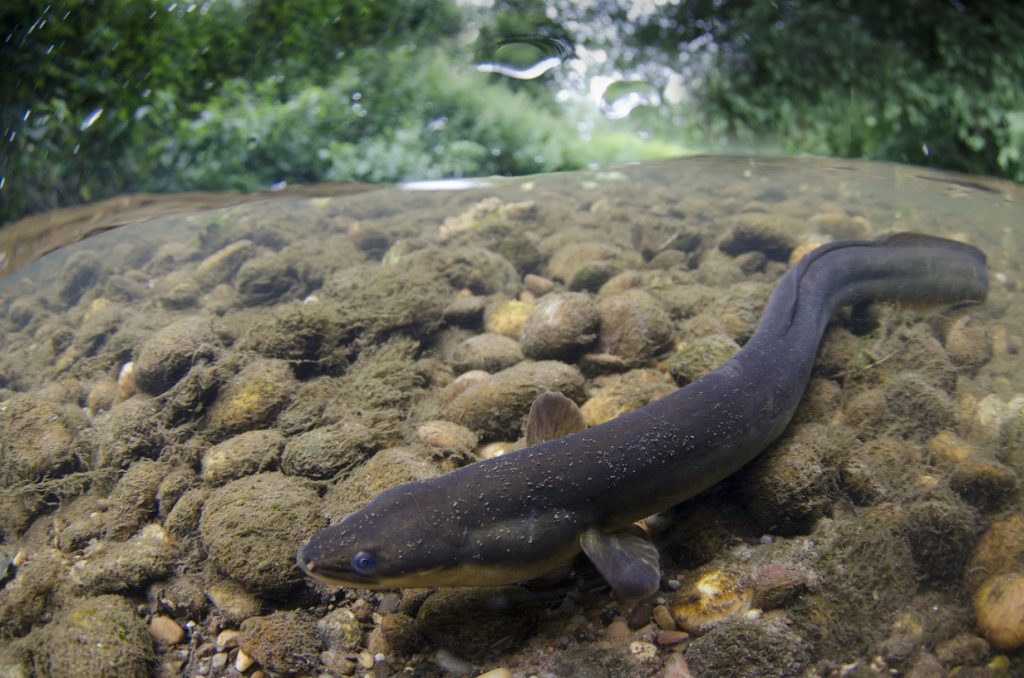 What am I?
I am an Anguilla anguilla.
Grown in mud and birthed from guts
I am stolen, smuggled, hunted
dissected, gulped and glugged.
I am the last supper, garnished with oranges.
I am the King of Fiji, disguised as Sina’s pet.
Aristotle, Freud or Pliny the Elder
no greedy human can place my elvers.
I am born from drops of dew
Satin, slippery, smooth.
I am guided by the moon.
A translucent tributary en route.
I am a curiosity, an unsolved riddle.
I am the limits of human knowledge.
I am a torment, yet tormented too.
What am I?

More about the european eel…

The European eel’s breeding ritual has tormented scientists, naturalists and philosophers for centuries. Even today, humans have never witnessed them breed. And no one knows where elvers (young eels) come from – although it has been whittled down to somewhere in the Sargasso sea. And so, the European eel, or, Anguilla anguilla, is still shrouded in mystery.

My research led me from statistics about the European eel’s decline to the work being done by The Wildlife Trusts, including the installation of a new eel pass at the Idle Valley Nature Reserve in Nottinghamshire. European eels are now critically endangered due to climate change, barriers to migration such as dams, destruction of habitats by things like hydropower turbines, fishing, disease and smuggling (by the tonne!).

My research then took a turn into murkier waters. I became interested in the mystery surrounding eels. It led me to a quote by Aristotle, who said, ‘Eels are born from the earth’s guts and grow spontaneously in mud’. And then to Sigmund Freud, whose first assignment as a professor was to try and find the eel’s reproductive organs. He never succeeded. And, did you know that eels are a dish on the table of Leonardo Da Vinci’s Last Supper?

Such is our fascination with eels, that even after football practice one week, the usual post-football chat was interrupted by, ‘Did you know that no one knows where eels come from?’. What a coincidence! It turns out that my teammate had listened to Silky Love, a RadioLab podcast with Lucy Cooke, who’s written a fantastic book called The Truth About Animals.

I read several legends and myths, including a beautiful story from Samoan folklore called Sina and the Eel. And I talked to the international artist, Joey Holder, who recently did a show on European eels called Semelparous in an abandoned swimming pool. A species is semelparous if it undertakes a single reproductive episode before death. I learnt from science journals how the moon and the Earth’s magnetic fields guide this epic migration.

I reached a point where I’d found the story I wanted to write. I felt enamoured by eels and how they embodied human curiosity. If the species were to go extinct, I wanted the poem to emphasise that we’d be losing a sense of mystery, adventure and exploration – the virtues that attract many of us to wildlife. This helped me decide my poem’s form: a riddle. Although the title might just give it away!