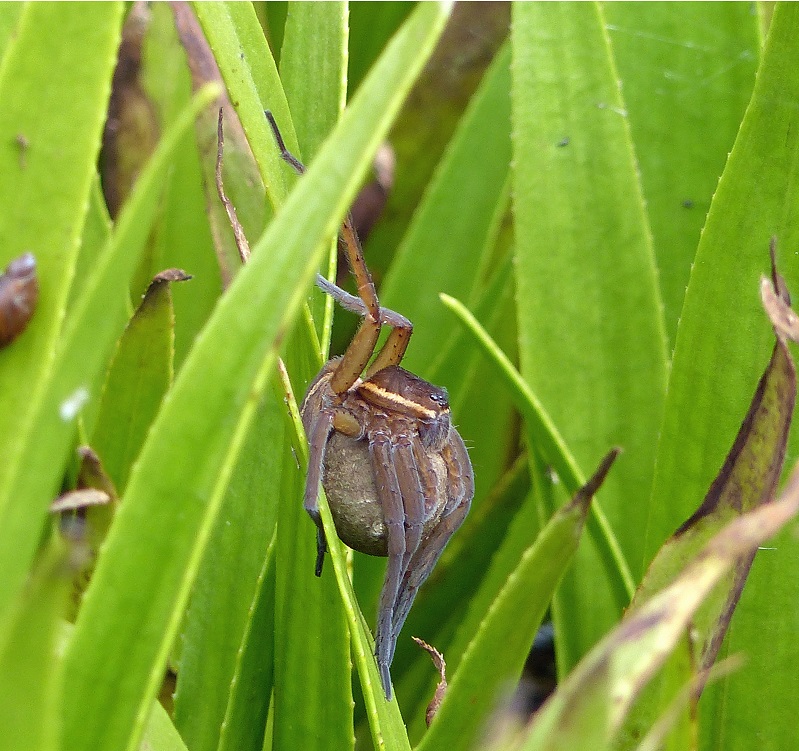 Dr Helen Smith is Spiderwoman.
She hand-reared spider babies in her kitchen;
now thousands of them are thriving in the Fens
with superhero powers.
They walk on water; they turn silver when submerged.
Helen admires their mothering skills:
how the females build a careful cup of silk to lay their eggs in.
But even the most protective mother can’t stop the climate changing.
I’d like to see them.
Instead I watch daddy longlegs scuttle beneath the rusting barbecue
while I Skype Mum on our balcony
and then, so she can spin a picture in my mind,
call Dr Helen Smith

More about the fen raft spider…

When reading about the ‘fen raft spider’, one of the largest and rarest spiders in Britain, I discovered the story of Dr Helen Smith. An ecologist by trade, Helen became interested in this species by accident. At that time, in the 1990s, only three populations of the Fen Raft Spider existed in the UK. The first was in Sussex, the second in South Wales, and the third at Redgrave and Lopham Fen – which happens to be right at the bottom of Helen’s garden.

As she learned about the spiders who lived so nearby – and how vulnerable they were to extinction – Helen described to me how she began to feel a sense of responsibility for them. She became involved in a project to introduce the spiders to new locations – and that was how, a few years later, she found herself hand-rearing baby spiders or ‘spiderlings’ in her own kitchen. I was amazed at the dedication Helen exhibited to ‘mother’ these spiders. Each spiderling had its own test tube, its own piece of cotton wool, its own twig, and needed its bedding changed as well as regular feeding. At one point, Helen had thousands of test tubes in her house at once (along with two long-suffering teenagers!).

As a result of the dedicated work by Helen and her team, around 25,000 new spiderlings were introduced to the UK population. The Fen Raft Spider now has a total of seven sites across the UK which – although still a very small number of total locations – are all thriving. The species continues to be assessed as ‘vulnerable to extinction’ on the IUCN Red List of Threatened Species, but it’s on track to be removed from the list altogether. But climate change is a major threat for the Fen Raft Spider, whose habitat will be profoundly changed by warmer temperatures. And that change has already begun: last year a severe drought curtailed its breeding season.

Motherhood seems an apt metaphor for conservation – particularly now, when many of us are separated from our loved ones. My parents live in Cambridgeshire, on the edge of the Fens. Coronavirus prevented me from not only seeing them but also the spider I’ve been learning about. Before long I hope I’ll be able to visit them – and finally have a look for the Fen Raft Spider among the reeds at Redgrave and Lopham Fen.