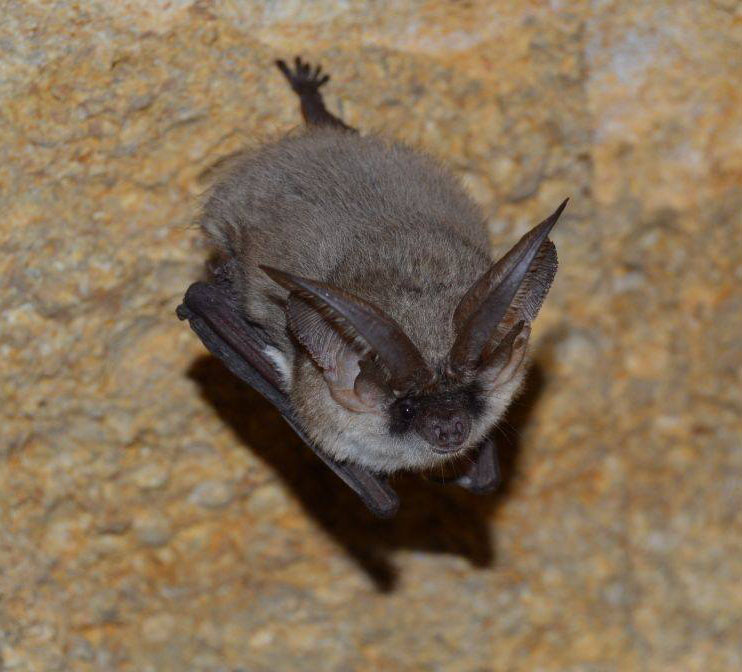 pale-bellied long-lived slow-swooper
you hear the dusty beat of moth
dry crick of lanky cranefly, sense the sudden glow of lacewing;
Disney cartoon hyperbolic [   ] furry body barely more
than the length of your huge ears, diaphanous as Tinkerbell’s wings –
curled back like horns under your leathery cape
at rest in your cool [   ] cave.

We have pushed you to the margins
but still your warbling calls echo over monochrome nightmarsh
inviting us to rewild;
let’s plant yarrow, dill, angelica & caraway
purple poppy mallow & marguerite –
come, feast on our feasting lacewings –
pale-bellied long-lived slow-swooper

More about the grey long-eared bat…

I’ve always been interested in bats, perhaps because of my predilection, as a film-studies tutor, for Gothic films.  I remember cycling home in the dark with a bat flying ahead of me,  just like Renfield when he discovers Bela Lugosi’s sinister coachman has disappeared and instead a bat is leading the coach up the mountain pass.  So Dracula and all things chthonic are very much part of my personal bat story.  I realise, however, that this might be giving bats a bad press.  There are no vampire bats.  Well, there are but not in Europe.  In South and Central America the common vampire bat will feast on cows, pigs and horses, while white-winged and hairy legged vampire bats are partial to sleeping chickens.  It would be very rare indeed for a human to be bitten by one of these mammals.  Bats are associated with the underworld in many cultures including Greek mythology and the Mayans.  They are so mysterious with their mouselike bodies, huge radar-dish ears, strange squeaks and intricately folding wings.  They sleep upside down, they live in communities with nurseries for their pups – they are completely entrancing creatures, and I fell a little in love with my grey long-eared bat and their comically huge yoda-like ears.

I remember going through the stone passageway of an Indian temple. I looked up and the curved stone ceiling was thick with hundreds of roosting bats.  I wondered, panicking slightly, what would happen should they scare and start flying in such a confined space.  In Sri Lanka I was awestruck by the size of fruitbats and how they hang in trees like, well, fruit.  Sri Lanka was where much of David Lean’s “Bridge on the River Kwai” was filmed, including a seminal scene where the Allied soldiers shoot the Japanese and all the fruitbats fly screaming out of the trees, blackening the sky.

I have been on batwalks with two experts who we knew only as Batman and Batwoman – they had echolocation devices and it was magical.  I love to see bats swooping through the darkening air in spring and summer, to see that wonderful leathery wingspread, made so iconic through the comics and films featuring the winged avenger.

To discover that any bat species is endangered is such a sadness.  The fluttering innocence of these creatures touches me in so many ways. I hope we can rewild enough to save them.