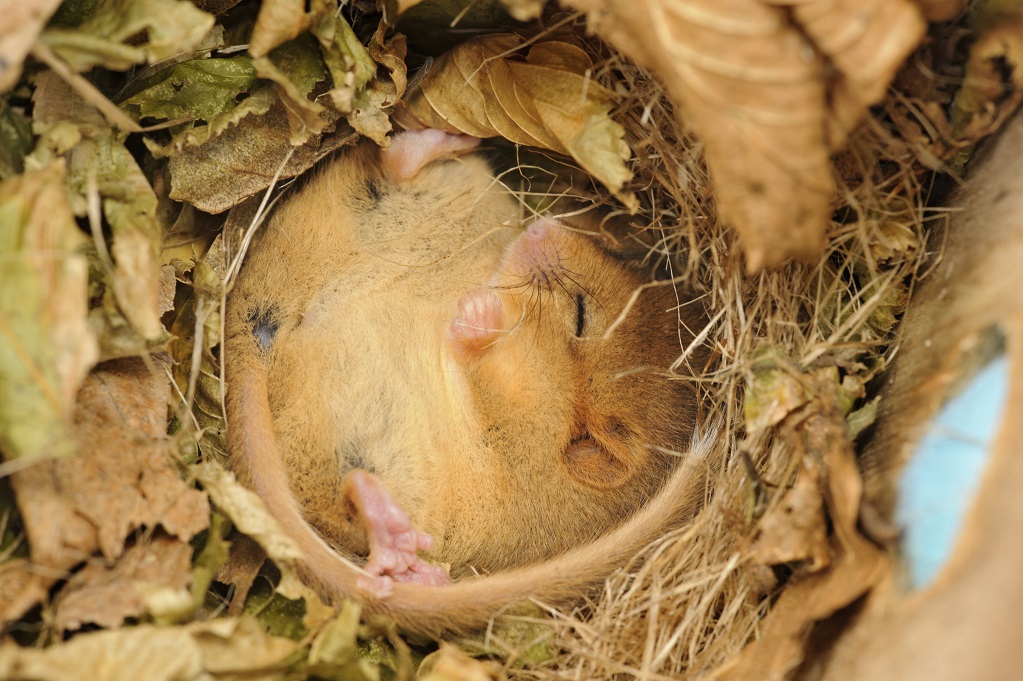 the table remains,
bare but for the cracked
teapot.
no mouse traps, no moon

no memory
nor muchness,
all vanished,
and the [ ] no longer sings in his sleep,
‘twinkle twinkle little bat.’

mind you, that pool is new,
made from the tears that time
– not an it, but a HER –
wept for the waste,
for the abandoned
hedgerows and coppices.

‘Wake up!’ Alice cries,
but the hatter isn’t here
to break the silence
and she still hasn’t worked out
the elddir.

how can you take tea
when no one’s left
to take it with you?

More about the hazel dormouse…

The chances of seeing a hazel dormouse (Muscardinus avellanarius) in its habitat were always slim. Not just because numbers have declined 30-50% since the turn of the millennium. And not just because it’s nocturnal or spends its waking hours in trees and hedgerows. But because the dormouse is, quite frankly, a ninja snoozer.

During winter, it hibernates in nests woven from strips of honeysuckle. In summer, when conditions are poor or food scarce, it snuggles down again into ‘torpor’ – a kind of energy-saving semi-hibernation. “They curl up in an old tree root, a crevice, a survey box, somewhere safe,” says Steve Oram, orchard biodiversity officer for the People’s Trust for Endangered Species (PTES). “Sometimes they’ll just bury themselves under a few leaves.” Like a natural duvet. I think the dormouse might be my spirit animal.

It was different in Lewis Carroll’s day, when the dormouse was a common sight and schoolboys kept them – snoozing, naturally – in their pockets. Did Carroll do this? Or was he simply reflecting his environment when he wrote Alice’s Adventures in Wonderland?

It is, of course, the dormouse’s sleepiness, along with those eyes, that has earned it an impossibly cute reputation. But cuteness is no guarantee of survival.

Since the Second World War we have removed hedgerows for farming and – when it became cheaper to ship in prime rainforest – we stopped managing our woodland. For 50+ years we let the tree canopy develop at the same rate, shutting out life-giving light down in the understory. There are other reasons for the decline but, says Steve, at its heart “it’s massive market failure.”

Shocking is what it is. Because recovery seems – on paper – so simple. Better woodland management, regenerative farming, putting back hedgerows. Doing the things we’d been doing for centuries, in other words. And yet, in July 2020, the hazel dormouse appeared on the inaugural Red List of British Mammals, listed as vulnerable, alongside the hedgehog, Orkney vole, Barbastelle bat and Serotine bat.

Change is happening. The dormouse is a protected species and for more than two decades the PTES has conducted a national monitoring programme, working with other organizations, including The Wildlife Trusts, to help protect known populations. Meanwhile, other groups, like the High Weald Area of Outstanding Natural Beauty, are helping farmers realise a different kind of value from their land.

There are signs that decline is slowing and in some cases populations are extending – albeit slowly – thanks to reintroduction programmes, like that at The Wildlife Trusts’ Brampton Wood in Cambridgeshire, where the hazel dormouse had been extinct since at least 1904.

In the absence of a real dormouse, then, I did what any good bookworm would do and took tea with a little girl, a mad hatter, a march hare and their sleepy companion. I ‘found’ my poem amongst the pages of Alice, taking words and phrases from the tea party chapter, moving them around, adding a few of my own so as to highlight the plight of our woodlands and its furry flagship.

With thanks to Steve Oram from PTES, Josh Hellon and the team at The Wildlife Trust for Bedfordshire, Cambridgeshire & Northamptonshire and Ross Wingfield from the High Weald AONB for their help with this essay.