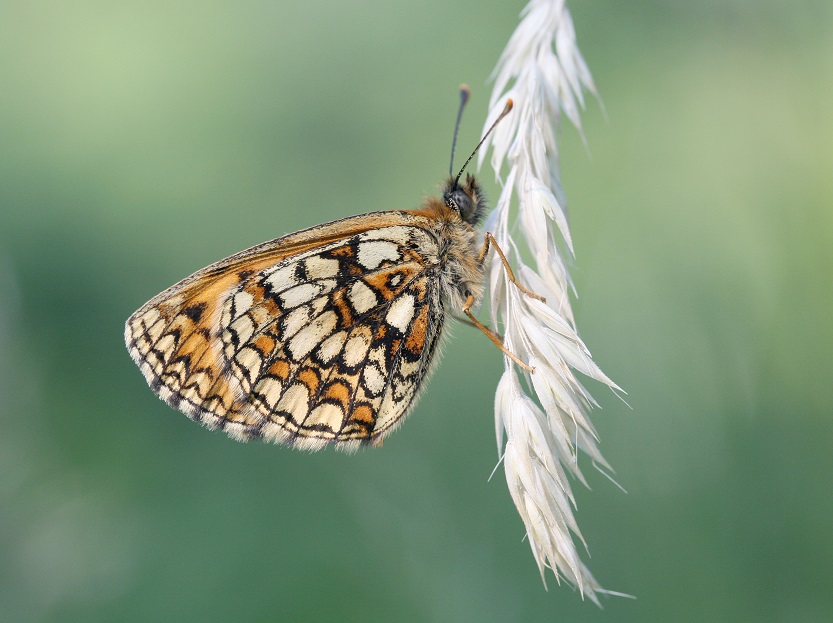 Fritter away not, flit-and-glide, survive, hide

The world turns but never repeats.

Battle on the heath, military artillery,

a body in pieces, delicate feelers,

softly feel her, kneel before her

track and record her.

if all else remains, still strange

Be with me always, fritter away not.

More about the heath fritillary butterfly…

Deeply disturbed by the apparent potential disappearance of my own species, I procrastinated like never before. For a short time, I could see humans as another dot next to the dinosaurs on the timeline of “Species that once ruled the Earth”. And future historians, of whatever species might take our place, would have artefacts suggesting that a tiny virus has wiped us out. Now, as here in the Netherlands the lockdown slowly lifts, David Attenborough’s quote resonates even more: “Everything works better when it’s connected’.

My butterfly’s name, Heath Fritillary, did not stick swiftly in my mind. But it brings up several associations. ‘Heath’ makes me think of heather, the moors – and the tragedies of Heathcliff. In fact, this butterfly can be found on Exmoor, though not on the Yorkshire moors. Reminding myself of the details of Wuthering Heights, the quote ‘Be with me always’ inspired me to write in the style of a love poem to this beautiful species. We don’t want her to leave us.

Over the last months, the false impression that life has any kind of permanence has been shattered for most people across the world. Yet, at the same time, there are both eternal truths and lifecycles that repeat. I wanted to reflect this in the opening. I was also inspired by my butterfly’s nickname, ‘woodman’s follower’. She follows the cycle of cutting around a wood, and flies close to the ground – so we can see her.

The Heath Fritillary’s favourite foods include Common Cow-wheat, golden yellow in colour, and Germander Speedwell, a good luck charm for travellers. I also learned that butterflies taste using sensors on their feet.

The species “suffered a decline of 68% in distribution between 1976 and 2014 and a decline in abundance of 87% over the same time period.” The Wildlife Trusts has worked hard to stop the Heath Fritillary from dying out. First, by tracking and recording numbers. Then, by finding ways to protect her habitat.

‘Fritillary’ is evocative of the gentle flitting of the butterfly’s wings (‘she flits and glides’), while at the same time connecting to ‘artillery’ and ‘military’- the fight she’s had to remain in existence.

Unable to glimpse my butterfly for real, I was guided by a stunning photo that contrasts the unique orange pattern, or ‘code’, on her wings against the vibrant green of a leaf. Her feelers so delicate; tongue or, more accurately, ‘proboscis’, out.

The fur around her body makes me want to stroke her. It also reminds me of the softness of butterflies my brother and I released as children, after my dad had captured caterpillars so we could watch them transform into chrysalises. They were tortoiseshells and, to my non-specialist eye, resembled the Heath Fritillary.