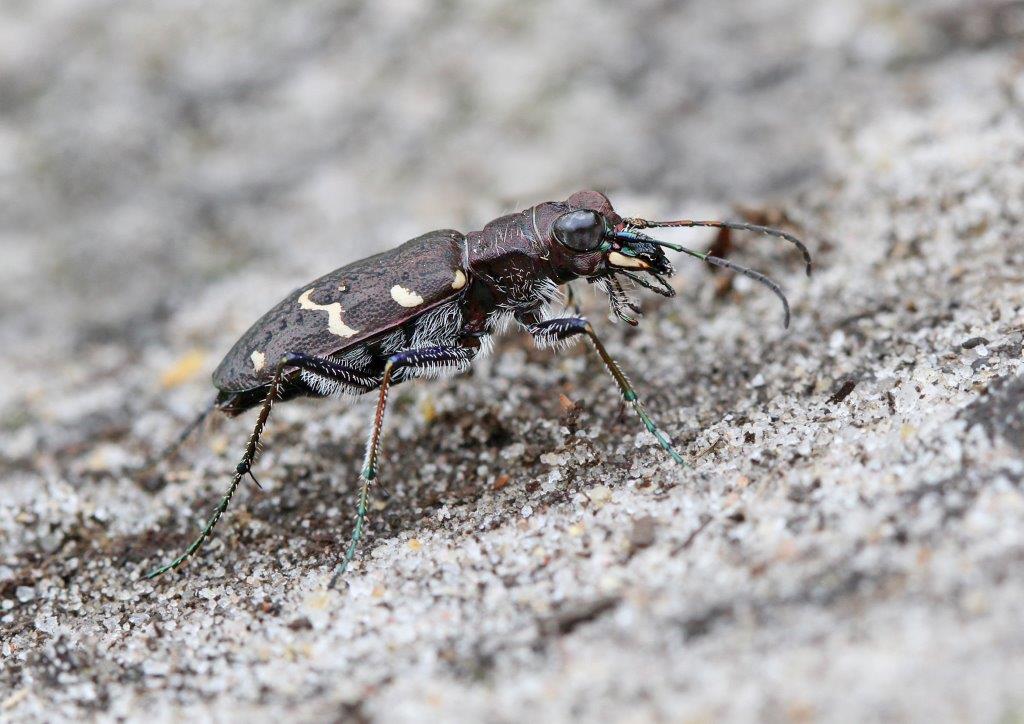 Hunting tigers on the heath

A far cry from measured youth
when it lurked alone,
cased in sand.
Propelled only by hunger
to snatch a juicy passer-by,
drag it down and suck it dry.

Unexpected on a mild Surrey heath,
such lunges and throes.
But half the [   ] are gone
in a single generation.
The homebody made homeless.
The little biter bit.

We goggle at such ferocity for life
and indignantly refuse to watch it go.

Conservation of a different stripe

You may think that conservation is all about leaving things alone. Urban conservation areas are protected by law from alterations. Conservative people are averse to change. So it’s natural to assume that conserving an endangered species consists mainly of letting its habitat grow undisturbed.

Not always. Lowland heath – a characteristically wild landscape of well-drained sand or seasonally waterlogged peat (or sometimes both) – was created by humans in the first place. For centuries people scratched a living from its infertile soil by felling trees for building materials and firewood, cutting turves for fuel, and grazing livestock on the resulting open ground. They established access tracks and their animals stripped away the remaining nutritious plants to leave the less appetising acid grasses, gorse, broom and heathers. The result was few trees and many bare patches, creating a mosaic of microhabitats. Over time, the heath tiger beetle and many other invertebrates, birds, reptiles and plants came to thrive in these conditions.

However, heathland is inherently unstable. When people no longer live off the land and stop managing it, it tends to revert to poor quality woodland. Seeds from deciduous trees blow in on the wind and take root in the heather. Leaves from the new saplings fall and progressively enrich the soil, enabling more trees, grasses and scrub to take hold, eventually overwhelming the heathland specialist plants. The habitat gradually declines and its dependent fauna disappears.

Just 20% of the UK’s lowland heathland has survived the last 200 years, but at least its ethereal beauty and ecological importance has been recognised. To recover and conserve the remaining areas, land managers are now taking a paradoxically unconservative approach, removing encroaching trees, cutting back scrub and creating bare ground artificially – and often using cattle for systematic grazing.

Nature reserves, military ranges and even golf clubs are employing modern machinery to cut heather to different heights, remove cuttings to avoid mulching the soil and peel stripes of heather turves – providing potential habitat for many heathland species. This may help the heath tiger beetle, which will only lay eggs on exposed scrapes where the larvae can dig vertical burrows.

Habitat restoration and species reintroduction programmes are painstaking work and progress is slow but there have been some successes, notably at Brentmoor Heath nature reserve, where the beetle was recently found for the first time since 2013.