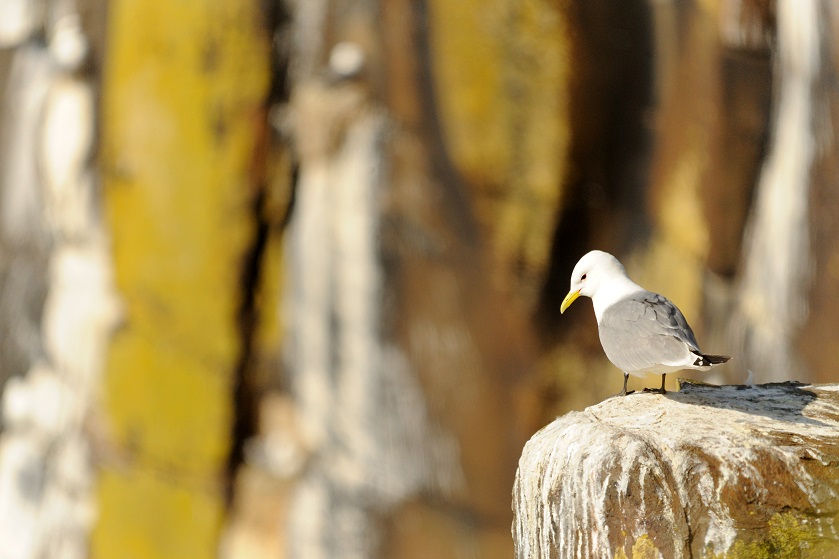 You cry your name

and you harvest the rising inches
of sandeels
slim, slippery strands to feed
the memory of wide raucous mouths
back on the narrow ledge
sparse horizontal
on the cliffs’ stern vertical rise
and rise

More about the kittiwake…

People and kittiwakes have a chequered history.

Kittiwake meat and eggs were still being collected for food as late as the 1950s, in spite of the traditional belief that the birds contained the souls of dead children. Humans do not generally find members of the gull family musically gifted, and the kittiwake’s eponymous raucous cry is no exception. (Its Latin name is Rissa tridactyla, because it lacks a gull’s usual number of ‘toes’, but kittiwake has the onomatopoeic edge.) In spite of its voice, it is a very pretty, gentle-faced bird. The adult’s plumage is elegant white and grey, with jet black tips to their wings. Juveniles are white with touches of black, and a distinctive black W across their wings. In Victorian times, adults and fledglings were ‘harvested’ relentlessly to feed the fashion for birds’ wings decorating ladies’ hats. In response to the carnage, The Plumage League was formed, becoming, in 1899, the RSPB. In winter, kittiwakes spend most of their time far out to sea. (Or, as this wonderful Wikipedia sentence puts it, ‘… of all the laridae, the kittiwakes are the most pelagic …’) Human damage to the health of the mid-Atlantic is also part of their drop in numbers, which stands at 70% since the 1980s.

There is one unlikely place where we can see these birds making a comeback, however. The furthest inland breeding site for kittiwakes in the world is Newcastle, on the ledges of the Tyne bridges, the Sage and the Baltic Art Gallery. The sites are protected by Tyne Kittiwakes Partnership, which includes Durham Wildlife Trust.

At its simplest, the kittiwakes’ drastic decline is the result of climate change affecting the temperature and currents of the Atlantic and the North Sea. This has influenced the health of phytoplankton and zooplankton, which has impacted on the sand eels who feed on them and, in turn, on the kittiwakes who collect the fish for their hatchlings.

Stopping, even slowing, climate change is such an overwhelmingly huge and hydra-headed task. We can flag, and think, ‘I’m too small to make a difference. Why keep trying?’

Sometimes we need to look away from the big picture for a bit.

Watch the nesting Newcastle kittiwakes on The Wildlife Trust’s webcam for a few minutes. Listen to them yell. They may not be singing us a sweet serenade, but they do remind us why we keep trying.