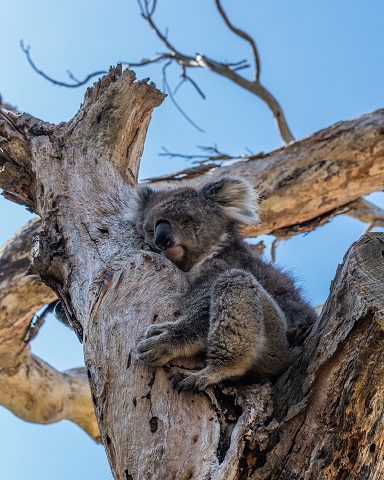 Once a jolly koala camped by a billabong

Heed the warning: smoke is thick.

Along the roadside, charred and bloody remains of a national symbol. The [   ] venture closer, crying, screaming, begging for water. Habitat disappears in a firestorm; those who survive are left homeless and hungry.

Once a fluffy photo opportunity, jokes of “bears” stoned on gumleaves. A third of the population now gone, alongside one BILLION other animals.

This is not once-off. This is life now. The apocalypse came; recovery is not guaranteed. A hotter, drier climate makes the land a crackling tinderbox. All we smell is pungent death.

Smoke is thick: heed the warning.

More about the koala…

In March 2020, Australia was declared free of bushfires for the first time in 240 days; 18 million hectares of land burned, smoke so bad it reached South America.

The scientific consensus is that the Black Summer was so devastating for two reasons: a positive phase for the Indian Ocean dipole, which led to cooler sea surface temperatures and so less rain; and climate change.

Australia has long been considered the canary in the coalmine on the climate front; as a child of the 1980s, growing up in South Australia, I learned a lot about CFCs and the hole in the Ozone layer. I also spent time in a unique place known as Kangaroo Island. Lying just off the coast of South Australia, the island is renowned for its biodiversity, one of Australia’s most important wildlife sanctuaries.

In total, the Black Summer burned about 215,000 hectares on Kangaroo Island in temperatures so high that road signs melted. Rescuers found animals flocking to tiny pockets of vegetation that hadn’t burnt; there are fears the island may never recover.

Experts are concerned about the survival of endangered species here, including the dunnart and the black glossy cockatoo, which numbered only in the hundreds before the fire. There are concerns, too, for the pygmy possum and the southern brown bandicoot. Those that survive the flames are left with no home, nothing to eat, and nowhere to hide from introduced predators like feral cats and foxes. But there’s concern not just for the previously-endangered: around 30,000 koalas, more than half of the island’s population, perished on KI that week.

In total, the Black Summer killed an estimated one billion mammals, birds and reptiles. Hard statistics are difficult to come by – some believe there were as many as 100,000 koalas in the wild, some say less than 50,000 – but the official estimate is one-third of all Australia’s koalas are believed lost in the fires. No one can forget those horrifying visuals of charred koalas begging passersby for water, screaming in pain. As the home to 244 species that are not found anywhere else, Australia faces new pressures. While its fauna has a distinct relationship with fire – Eucalyptus trees depend on fire to release their seeds – its animals are running out of places to hide. More than 100 species were listed for urgent intervention post-fire.

The world was captured by Australia’s plight over Christmas, but attention veered as the pandemic hit. The world moved on, but those koalas are still recovering from their burns; those habitats will take years to regrow. The time has come: the government must prioritise stronger climate policies. Fires spaced apart means the landscape, vegetation and animals have time to recover. Climate change means these fires will continue, more intense and more frightening each year.

Heed the warning: these animals need us to urgently work to save our climate. It won’t just be the koalas that perish in vast numbers next time.