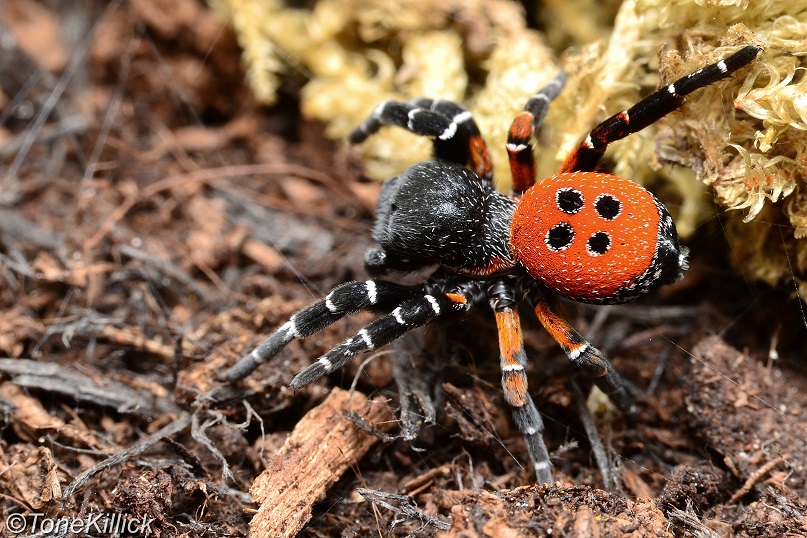 A most elusive velvet spider

Emerging, only to leave home in gorse-scented springtime
as spiderlings or,
As mature males, strutting out amongst the stones and heather;
Resplendent in scarlet totty-hunting jackets with six black velvet buttons.

Against steep odds – Lost then found

I’ve been paired with a spider!

I smile – recalling moonlit ‘Maman’ towering by Tate Modern.
I shudder – reliving childish terror of huge, hairy house spiders.
I shiver – registering their scratchy scuttles across the ceiling, amplified by the dark…

Dream-catchers wait to trap my unconscious thoughts and fears.

To keep awake, I take to the world-wide web (spiders get everywhere!) and make a joyous discovery.  I have been gifted a rare gem – the Ladybird spider – so protected, that, even in more normal times, I could only visit their Dorset dugout with a licensed, Eresus, expert.  I shall have to get to know them better by virtual means.

Tiny, the size of a fingernail, the males are the zebra-legged, polka-dotted, poster-boys of British spiders, tumbling across their heathland home like ‘lucky-six’ casino dice.  The thumbnail females – cool, sophisticated, black – are partial to a bit of bling.  Resourcefully reusing shiny beetle carapaces to decorate their webs.  The ultimate recyclers, they digest themselves to feed their spiderlings, as a final maternal sacrifice.

Part of an order that appeared in the fossil record more than 300 million years ago, these awesome, arachnids deserve their second chance.

The odds on their recovery were low when just seven Ladybird spiders were found, by accident, in 1980.  2020’s target is 2,000 ladybird spiders living across 20 colonies. Has two become their lucky number?

Unbeknown to them, inclusion in the inspirational ‘Back from the Brink” programme, funded by the National Lottery, was a lucky break for this magical minibeast.  Taking a leap of faith, a coalition of wildlife organisations is working in partnership, courageously combining their talents, and engaging the public, to rescue the spider and it’s habitat.

Who would have thought that their successful restoration would be transformed by reusing our rubbish: burrows, fashioned from plastic water bottles, protect the spiders over winter, ready for relocation to new dots on the map each spring.

Risk continues to be part of their story: not least, possible reductions in money, monitoring and manpower post Covid 19 and Brexit.  But it is refreshing to find a success to celebrate; renewing faith and hope in nature’s recovery and what can be achieved through selfless teamwork, plus, spider-like patience and persistence.  A sustainable web of care now surrounds the Ladybird spider, giving it its best chance of thriving, not just surviving, for more than a century.