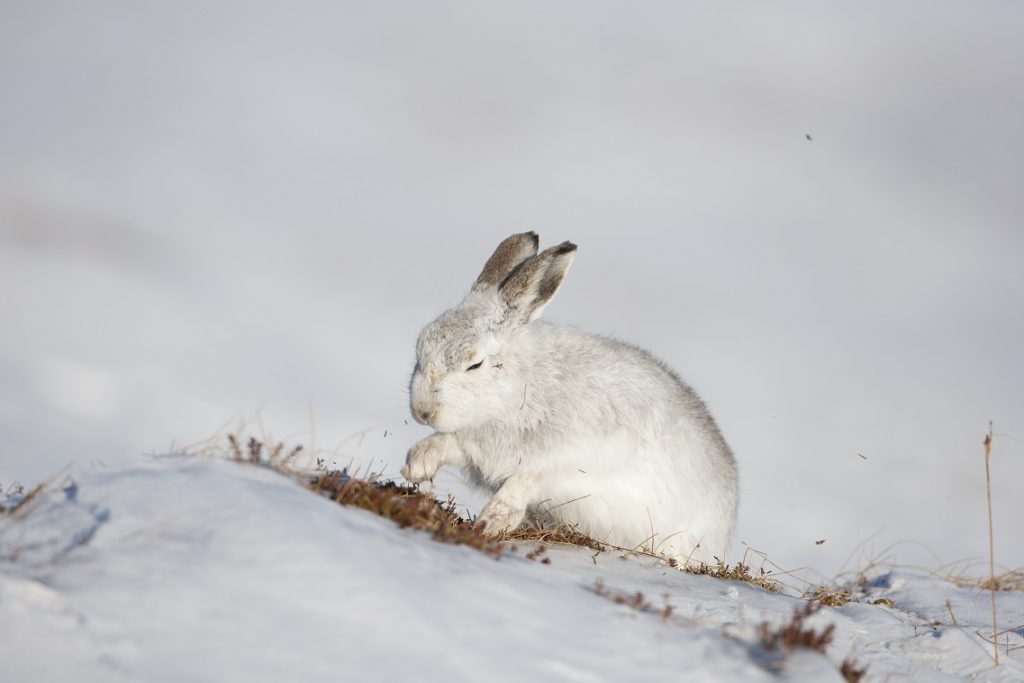 The North wind ruffles my winter-white pelage, teasing out strands of my moult. They vanish, like the trees, the Romans, the bears, the wolves, and now [   ]

Landscape as mottled as I now am offers a choice of snowhole or heather hollow. There to hide, nose twitching, ears pricked, amber eyes wide.

Leveret no more, I can zigzag away when fox or buzzard approach, though still I look up for the eagle.

But here come men on chariots, with fire-sticks and dogs, blaming us for their dearth of grouse.

More about the mountain hare…

I was delighted to be assigned the Mountain Hare (Lepus timidus). Though I live in Scotland’s Southern Uplands, I have never seen one in the wild. Their larger lowland cousin, the European or Brown Hare is plentiful, startling me and my dogs when they break from cover to zigzag over the fields.

The mountain hare is the only leporid native to Britain. The brown hare and the rabbit are both ancient imports, introduced by the Romans as food and fur (“comin’ over ‘ere, eating our grass...”)

It has two distinct seasonal coats, providing maximum camouflage — all white except for black ear-tips in winter, and in summer grey-brown, with a hint of blue undercoat, hence one of its many alternative names: the Blue Hare.

In the transitional seasons, when brown against the snow or white against the heather, they are more visible from a distance to their primary predator, the eagle: but this also makes for good photographs. The rest of the year they can almost vanish from the view of eagle eye or telephoto lens.  Climate change means there is less winter snow cover: it remains to be seen whether selection pressure will drive the emergence of non-moulting hares.

The landscape they inhabit has seen many disappearances: the ancient forests, cut down millennia ago, and suppressed since by sheep and deer; the Romans, driven away from the only part of Europe they could not conquer or hold; and the bear, the beaver and the wolf, hunted to extinction.

Their numbers are falling dramatically, not from the usual indirect effects of human activity (such as habitat loss, and changing agricultural practice) but the very direct business of large scale culling.  Game keepers shoot thousands, in the belief hares harbour the tick-borne viral disease Louping Ill, which depletes Red Grouse. They dispute the drop in hare populations, arguing that the cull is justified, and that hare numbers are stable on well-managed moorland. There is no dispute that the value of a grouse shot by a hunter as a prize is so much higher than that of a hare shot by an estate worker as a pest.

A public campaign has lead to a Scottish Parliament vote to ban unlicensed culling. While  the decision and the way it was made have angered land managers, the licensing of culls affords an opportunity for unpartisan research to examine population numbers and to test the hypothesis that more hares mean fewer grouse.