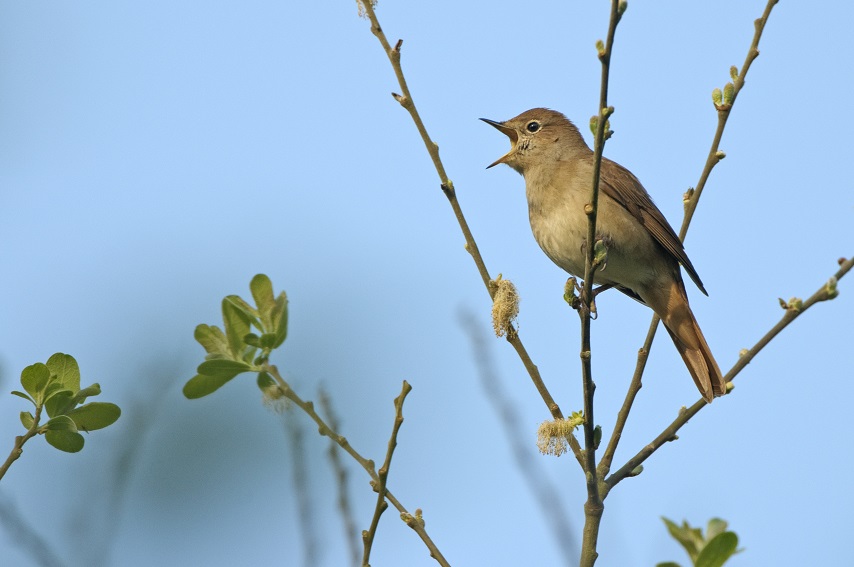 His song soars to find her.
With bubbling grace notes
[   ] sends a sweet serenade through
the crystal stillness
of the night.

[   ] pauses, tilts his brown head
as if scanning his back catalogue.
With mournful tones,
the liquid voice fires
sorrow towards the stars,
lamenting losses
Of numbers
Of habitats.
Of futures.

Deep in the scrub,
an understudy joins in.
[   ] fluffs his lines,
losing the riff to the maestro.

Meanwhile, his song feels for the horizon
To eternal spring creeping north.

Towards the strongest singer,
she surfs the green wave to find him.

More about the Nightingale…

Like an unforgettable moment in history, I know exactly where I was the first (and only) time I heard a nightingale sing. It was in southern France on a balmy, still night. It is a misnomer to think that nightingales only sing at night. Like other songbirds, they sing at any time, but it is the best time to distinguish them. In their summer migration from sub-Saharan Africa, the males arrive first. They will sing constantly, day and night, until the females arrive a few days later. They are serenading and showing off. The female will seek out the strongest singer. The best will have a repertoire of 200 songs, selecting different melodies and sequences depending on what he wants to say. He has a range of 1000 noises – a blackbird has 100. Nightingales learn songs from their parents; therefore, offspring of a virtuoso will have a better chance of becoming that strong singer too.

The nightingale is iconic in British artistic culture, the subject of poems, songs and even a festival. There is real danger that this is only where will enjoy them in the future. In the last 50 years, the British population has halved, with a 90% decline since 1995. There are thought to be only 6,000 singing males left, with most sightings in southern England. Climate change suggests that warmer summers are more favourable for the return to Britain, but the nightingale has also made an evolutionary adaptation of smaller wings — perhaps it is flying to other places to breed. A greater contributing factor to the decline is the loss of habitat. The nightingale is a shy bird. It favours scrappy scrubland to bury itself in the thickets of blackthorn, bramble and hawthorn. A nest will typically be a metre into dense shrub. Rising populations of muntjac deer are eating the understorey of woodlands, destroying ideal nesting sites. There is also devastation by humans. In 2018, Hampshire & Isle of Wight Wildlife Trust, despite extensive campaigning, reported the destruction of vital habitat for nesting birds at Cashbook Common, Romsey. The land was bought for housing development.

What can we do about it?

As well as not destroying breeding habitats, projects of rewilding might be the answer. Knepp Wildlands provides a wonderful example. They converted arable farmland to the sort of scrub that nightingales love to breed in. They have reported three breeding pairs in an ongoing project to monitor progress. It is an exciting project in nightingale-worlds, and if it had not been for the pandemic, I would have tried chasing nightingales across southern England. The situation is precarious for nightingale sightings (or soundings) in Britain, with the Wildlife Trust working hard to ensure that it remains a bird that we do not refer to only in our artistic culture.