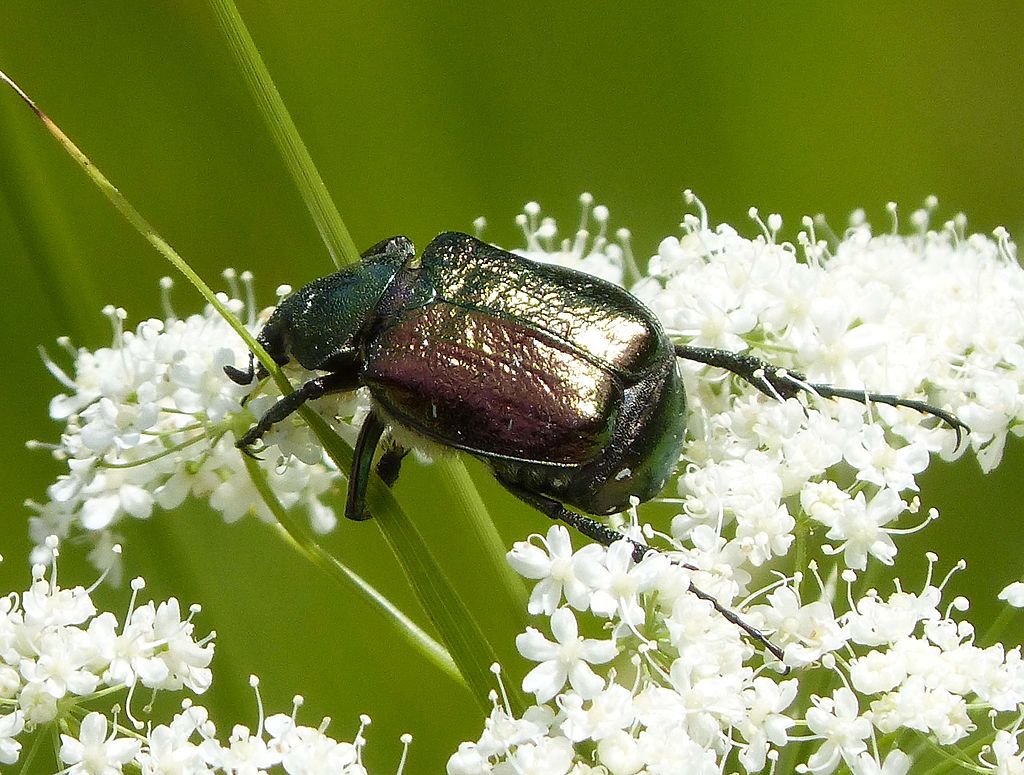 We hold on
Up in the cherry trees’ cathedral heights.
I move the ladders for the women pickers,
Whose teasing makes me shy like the [   ].

As June tips into high summer, the true [   ]  makes his entrance.
So long spent hiding, mere grub within his rotting bough.
Now a dandy in emerald silk jacket, stretching his wings in the sun,
Before shimmering off to meet his belle of the ball.

Today, housing estate stands tall, mighty orchard uprooted,
But the [   ]’s ancestral home was delicately transplanted
To the community orchard of young, squat trees
And together
We hold on.

More about the noble chafer…

My investigation into my curiously named creature led me – naturally – to the Wildlife Trusts’ website. There, I met a beetle. A handsome beetle, befitting his grand name. His bronze-green body iridescent like the sheen of oil on water. A relative of the scarab beetle, worshipped by the ancient Egyptians as a symbol of rebirth and renewal.

The Gnorimus nobilis is classed as ‘Vulnerable’ in the UK, which means it faces a very high risk of extinction. Its primary habitat is traditional orchards where the larvae live in, and feed on, the decaying wood of fruit trees. No surprise then that they are found in Worcestershire, Gloucestershire and Herefordshire. However, they have also been sighted in the New Forest, Oxfordshire and Kent.

Beetle-expert Laura Bower of the People’s Trust for Endangered Species explained how modern orchard management – with closely planted dwarf rootstock, the removal of dead wood and use of pesticides – has caused the decline of noble chafers. The grubs need standard rootstock (the towering cherries from the centena) that provide rotting wood and are widely spaced so the sun can warm the trunks generating a microclimate.

I learned how a traditional cherry orchard in Iwade in Kent had been grubbed and a housing estate built. The resident noble chafers had been relocated to the new community orchard. Laura marvelled at how those noble chafers were still there: “hanging on by their fingernails”. I loved this idea of noble chafers surviving despite the changing environment.

On the Kent Orchards for Everyone website, I discovered a quote:

In Iwade there were lots of cherries years ago, I was only 16 and went ladder moving for the women…was very shy and the women soon cottoned on to that and spent all day taking the mick and telling naughty stories making me go so red.  David

Could I draw a correlation between David and the noble chafer? Could I show how the orchards and the world had changed but they are both “hanging on”?

I hope the noble chafer can channel the scarab beetle’s mythical powers of regeneration. The Wildlife Trusts, the PTES and other organisations are working hard to conserve and cultivate orchards. But maybe hope for the noble chafer also lies elsewhere. In mainland Europe, they live in oak and beech trees, and in the UK, noble chafers can be seen alongside the A35 in the New Forest. We don’t know numbers and recorded sightings can be 15 years old, but as Laura said: “the more we look for them, the more we find them”.