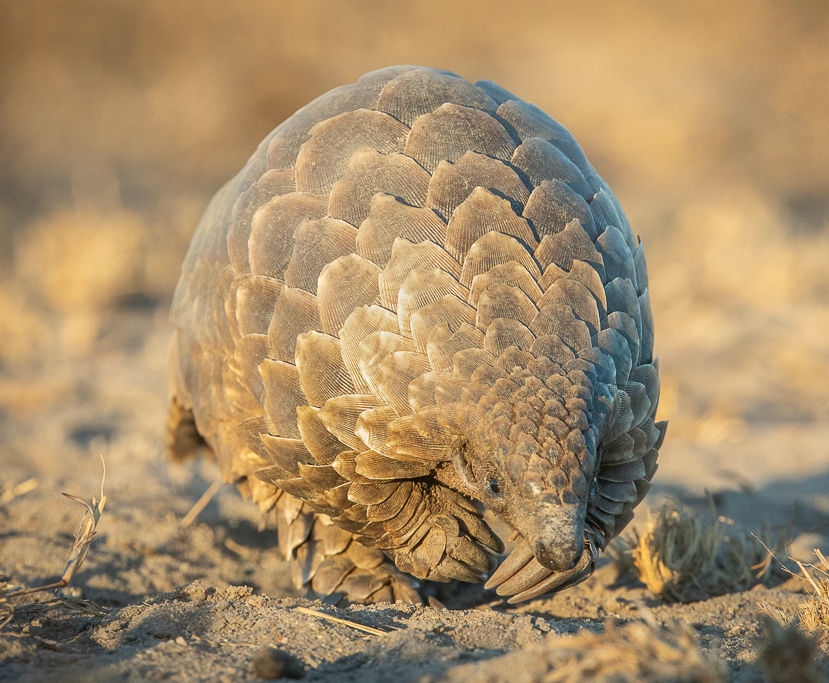 Ants and termites scatter
As claws and snout tear into nest.
Tongue, sticky as a liquorice shoelace
Sucks up nature’s pests.

For curious lion cubs
He curls up in a ball
Protected from claws and teeth
Beneath his armoured roof.

Against men this trick
Makes him easily portable property.

But how long will we survive
When there’s no longer
An impossible animal?

More about the pangolin…

A living dinosaur, a walking artichoke, a breathing pine cone… the pangolin is not easy to describe. But it has the unenviable status of being the world’s most illegally traded mammal.

Pangolins are oddities of the natural world. They look like anteaters covered in scales, but are more closely related to cats, dogs and bears. They walk on all fours, but can rise up to sniff the air and move along quite happily on their hind legs. They are largely solitary, nocturnal and live in burrows, but some species climb trees and are capable swimmers. When threatened, they curl up in a ball like a hedgehog.

There are eight species of pangolin, four can be found in Africa and four in Asia. All are listed as endangered or vulnerable.

I got to know pangolins by watching a film called ‘The Eye of the Pangolin’ which follows conservationists trying to track down African pangolins. Seeing these odd little creatures curling up along someone’s arm like a cat or mischievously climbing on top of a ranger’s hat, I fell a little in love.

Seeing hundreds of their frozen bodies and sack upon sack of their scales seized from illegal shipments, I was horrified.

Pangolins are illegally hunted and traded for their meat, which is considered a delicacy in some south-east Asian countries. Their hard, protective scales made of keratin – the same stuff that’s in our hair and nails – are used in traditional Chinese medicine.

Pangolins use their claws and snout to dig into ant and termite nests. They can devour up to 20,000 a night using their sticky tongue, which can be almost as long as their body. This natural ability to remove pests that could demolish crops and vegetation has earned them the nickname ‘nature’s gardeners.’

For my centena, I focused on African pangolins as I was due to visit Zambia and Botswana in May 2020, before the corona virus struck. Pangolins were linked to the initial outbreak of the Covid-19 disease in China. It’s not clear what, if any, role they played in transferring the virus from animals to humans, but on 24 February 2020, China banned the trade and eating of many wild animals including pangolins.[2] And on 9 June, pangolin scales were removed from the official list of ingredients approved for use in traditional Chinese medicine[3].

That may sound like good news for pangolins, but given that trade in these intriguing creatures was already illegal, it’s doubtful whether they can emerge from a global pandemic better off than before. As humans, we can only hope.