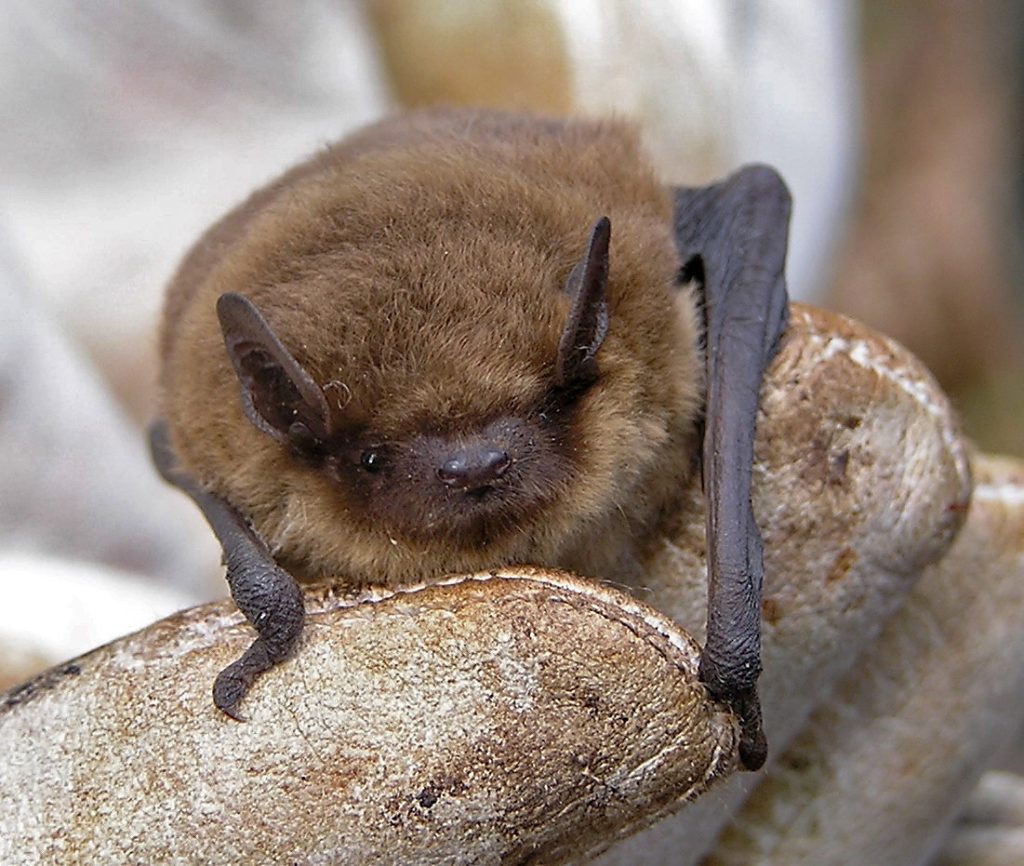 In flight as night falls

It’s so small.
Thumb-sized,
light as a coin in your palm.

Bony black wings, a mask of dark fur.
A bad press maybe.
But this is no villain.
A pollinator, a pest controller –
its numbers drop amid chemical crops.
Renovated rafters raise a toxic threat.

A little welcome might just save this tiny creature,
a box house here, a friendly garden there.
It’s an easy gesture.
It’s so small.

The bats I saw as a child, flitting high over our little garden, may well have been pipistrelles. They’re the UK’s commonest bat, and tiny enough to pop in a matchbox. My younger self may have heard the clicks and buzzes of their echolocation, but the sounds are lost to my adult ears without the aid of a detector.

I know now that bats don’t just use their calls to avoid going bump in the night. They use sound to hunt for bugs to dine on during their aerial hawking sessions – and they can off as many as 3,000 in one night. In Summer, males attract females by making songflights around their roost. These males might live alone or in small groups, but females, when the time comes to birth their pups, gather in maternity colonies. Each mother usually has a single pup, but she joins a community to care for it, suckling in solidarity until the young leave the nest.

Watching the Essex Wildlife Trust’s batcam live stream (now obscured by layers of guano – ie, bat poo), I was fascinated by their angular, leathery wings. The twirly talons nestling close to their fuzzy, snub-nosed faces, I discovered, are essentially thumbnails. Their wings are boned with fingers jointed much like humans’, except these fingers run the length of their entire bodies. Their flight is quite different to the flap and glide of a bird – it’s almost as if they swim through the air, moving their digits individually to pull themselves like dark hands across the sky.

Through history, bats have been painted as villains and vampires. In the time of coronavirus, they stand accused of spreading illness, while human disruption has arguably caused the greater harm. But bats are pollinators, and remarkable pest-controllers, serving not just farmers who could lose their crops to bugs bats don’t eat, but humans too, who may fall foul of mosquitos spared as bats decline.

Pipistrelle populations fell dramatically in the last few decades – by 60% between 1978 and 1986. Partly to blame are modern agricultural, building and renovation practices – and the chemicals that go along with them. But conservation efforts may just be paying off: the numbers are showing more recent signs of recovery. Thanks to a range of approaches, from monitoring projects and promoting bat boxes, to working together with churches (popular roosting places), building companies and regulators, perhaps some of the threats to these creatures are being eased. But this is big rescue job, and success hangs in the balance.