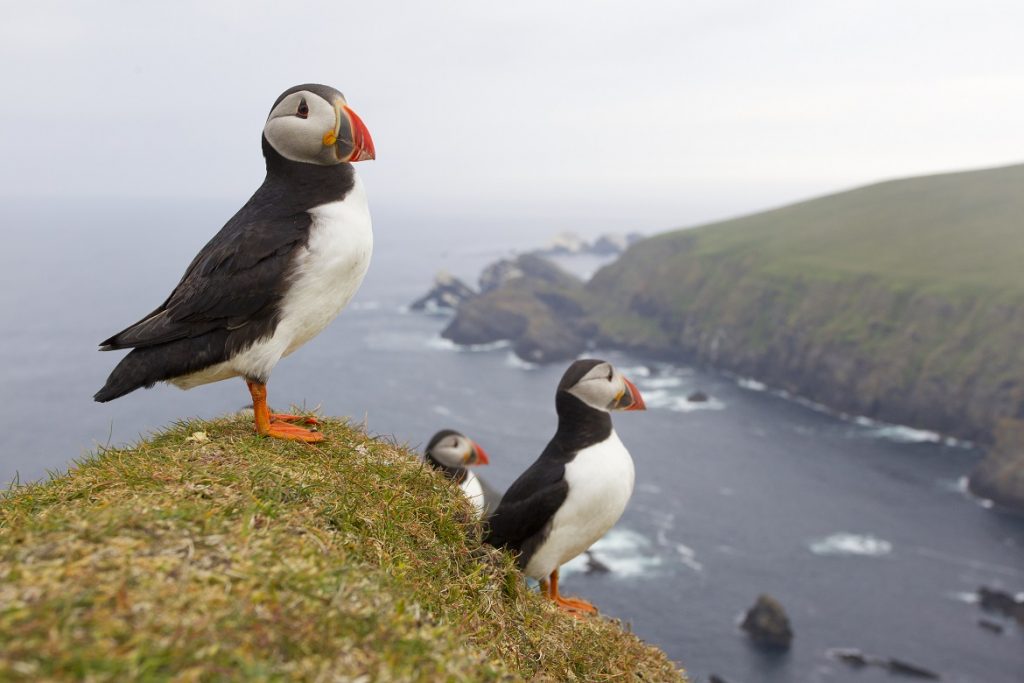 The clifftop clown, us [   ] learn a craft
Of comic landings, wet fish, clumsy walks,
Painted and stockinged, a carnival raft—
Though wearing this beak can get rather awks!
Must I play the fool? Pray, hear my sorrow:
Warm tides, storm clouds and fleeting sand eels,
They’ve left me puffing – forecast a burrow’s
Empty fate – wherever is my yearned-for mate?
Courage [   ]! The circus must go on—
And yet this gaudy mask ill-fits my mood,
Preening, loafing, dwindling, tending to brood
O love, can you be so late? Spare a laugh
Ruin’d nature, shed a tear for the clifftop clown.

The multicoloured bill of Atlantic puffins makes them one of the most iconic birds to visit our shores. Outside of the summer breeding seasons, while they’re at sea, their graphic counterparts perch on our bookshelves alongside Penguins and Pelicans.

Their comical antics (spend a spare fifteen minutes watching one of the puffin colony webcams online and you’ll see why) have earned the nickname ‘Clowns of the sea’. It’s not surprising these curious birds elicit lifelong fondness and are one of the best-known and most-loved British seabirds.

But the plight of puffins in 2020 portends tragedy: they are designated ‘vulnerable’ on the IUCN’s Red List (https://www.iucnredlist.org/species/22694927/132581443) and Europe’s population is projected to fall by 50-79% during 2000-2065. According to the IUCN the causes are multiple, including ‘the combined impact of predation by invasive species, pollution, food shortages caused by the depletion of fisheries and adult mortality in fishing nets.’ Suddenly the painted face, harried look and frantic pace take on a different, desperate tone.

While some of those causes are manmade, a group of scientists in Iceland believe that the species’ decline might have less to do with human activity than first thought. Iceland is home to 60% of Europe’s puffins – found in burrows that breeding pairs return to each year, after spending eight months apart, alone at sea. The temperature of Icelandic waters is governed by long-term cycles called ‘Atlantic Multidecadal Oscillation’, and in 1995 we moved from a 30-year cold phase to a warm one. That slight rise in sea temperature seems to correlate with a decline in sand eels – puffins’ favourite food. This forces the parents to fly further in search of food. Sadly, this means more and more parents have to make the terrible decision to feed themselves rather than their pufflings.

In the UK an estimated 450,000 puffins nest in colonies around the coastline. While numbers in certain colonies have declined by up to 42% over the past five years, others have seen healthy growth – thanks to conservation efforts that include protecting them from invasive predators, such as rats and cats. Dr Matt Wood, senior lecturer in biosciences at University of Gloucestershire says that in marine science, ‘puffins are seen as ocean sentinels – their survival and breeding success is indicative of the health of the ecosystem they depend on’.

And puffins need more help if we want to enjoy their characterful presence on our cliffs for generations to come. COVID-19 has impacted National Trust and RSBP visitor revenues, so the first thing you can do is donate or visit a reserve at the next opportunity. My first stop will be Skomer Island, Pembrokeshire.