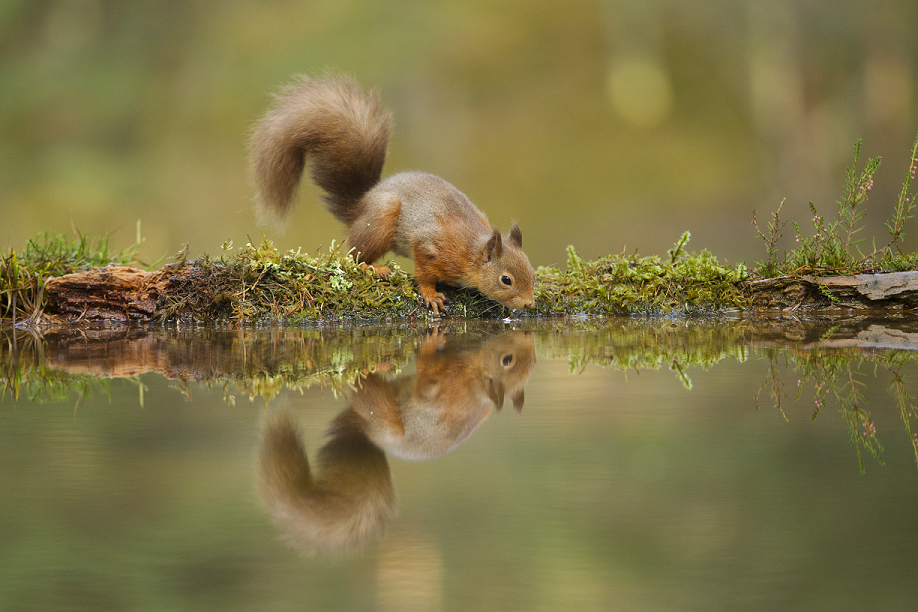 Through the hedge they come, only two this time, skirting the garden shed.
Iain, the artist, bends, tending his plants; bright splashes of colour he envisaged in dreary winter when his rare russet visitors nestled quiet in trees.
On their foray today they pay him no heed,
Nor, it seems, he them, though he welcomes their passage.
“Nutkins,” he mutters.
Regardless, they flow, copper-coloured in sunlight, through this patch of paradise, over the high back fence, seeking treasure in Spruce trees, hung wealthy with cones.
Evening darkens. Iain, cosy indoors, watches, wistful,
As shadow tails disappear back through the hedge.

In the early 1900’s, when Beatrix Potter met and immortalised Squirrel Nutkin, the population of red squirrels in the UK numbered in millions. Little could she or anyone else have realised that the introduction of the American grey squirrel to large estates, as was fashionable in the late 1800s, would decimate the red population within 100 years.

Grey squirrels have contributed to the decline in the red population in different ways. Firstly, they competed well for food, putting the red populations under stress — which meant they bred less successfully, and numbers began to decline.

The other, fatal, effect was Parapoxvirus, a disease carried by grey squirrels which remained unidentified until 1981.The grey can resist the virus, but their red relatives can’t. Mortality numbers among reds were catastrophic, with decline up to 25 times greater than through competition alone.

As grey squirrels began to outnumber reds, it became clear a strategy was needed to separate the two species, to mitigate risk of the red disappearing altogether.

Through the work of The Wildlife Trusts and The Woodland Trusts, in co-operation with landowners, the spread of the virus has largely been controlled through systems of tracing, trapping and culling the grey squirrel.

The current UK population of red squirrels numbers about 140,000, three quarters of which are in Scotland, which had remained unaffected by the virus until 2005.

This number has remained steady for a few years now and will hopefully begin to rise, to challenge the grey squirrel count of over 2 million.

Living in a highland glen in Scotland I have recently had time to spend watching the red squirrels who live here. They are enchanting, elusive creatures. An early morning glimpse of adult squirrels nibbling beech mast is a triumph. More usually there is a flash of russet brown as they disappear into the canopy the moment they sense my presence. They are safer here from greys, protected by buffer areas of conifer plantings, and arguably, by an increase in the number of pine martens.

The squirrels, of course, are oblivious to the danger of the virus, and to the concern we have for their wellbeing. I for one, though, am comforted by the ‘new normal’ of increasing numbers of volunteer squirrel counting projects, ongoing research and regeneration of woodland areas suited to the species.