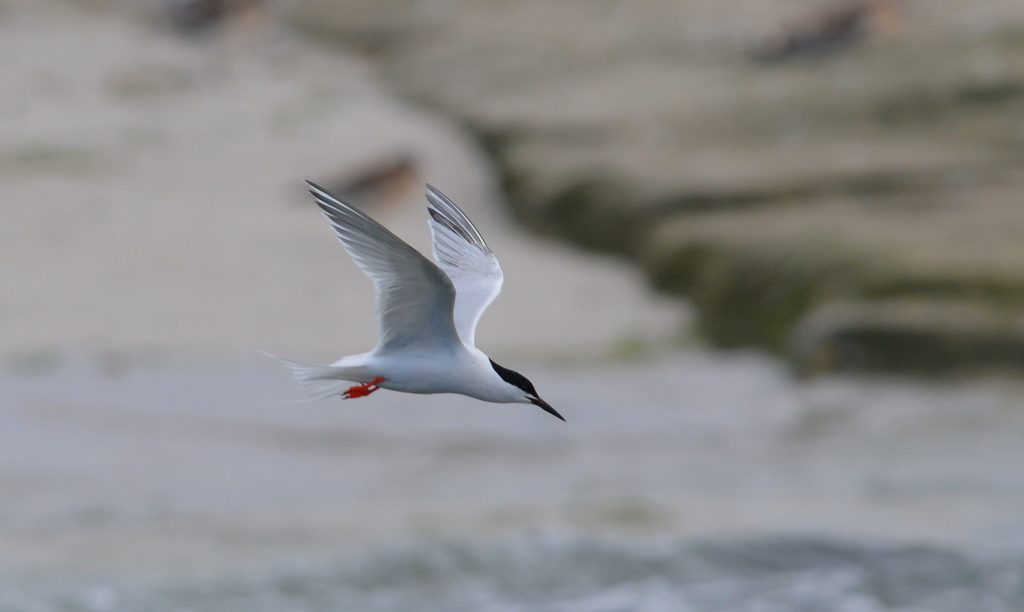 Disappearing from view, the [] descends
Plunging
it dives
down
into the deep
for fish
to feed the hungry next in line

The timid [] finds
sanctuary
on remote rocks
crumbling into the sea
sheltering
from relentless rain
and unforgiving winds
here is safer
nesting, away
from the call of the gulls
and hands
plucking them
from the skies

But the tide is turning

Almost ghost-like
the [] takes flight
tail feathers streaming against the blue
it climbs
high
Soaring upwards, before disappearing from view

More about the roseate tern…

We’ve got a lot to answer for. Because of us, the roseate tern, the UK’s rarest seabird, has been worryingly close to extinction on more than one occasion. Inspired by the behaviour of this marvellous bird, diving sharply into the water to fish and soaring upwards in mating ritual, the metaphor of its decline and recovery took shape.

In the 19th century, the bird was highly sought after for its plumage. Their long tail feathers adorned the hats of well-to-do ladies, and numbers of roseate terns plummeted, to keep up with demand for the latest trend.

When new wildlife laws were introduced in the early 20th Century, the coastal bird population started to grow again. But once again, in the 1970s, humans played a big part in ensuring that only 467 pairs of roseate terns were left by 1989, across just four colonies in western Europe. Egg collecting (a ‘hobby’ only seen in the UK) meant that collectors seeking the rarest bird eggs would take eggs from nesting sites, resulting once again in a dramatic fall in numbers.

So, it’s no wonder that these timid birds seek remote locations to lay their eggs and raise their young, away from fashionistas and opportunists. But, this in itself is fraught with danger. Whilst we can’t be held responsible for predator attacks from gulls and other creatures, we do share some of the blame when it comes to their ever-decreasing food source and habitat.  Climate change has meant that fish stocks run low and rising water levels mean that nesting areas crumble into the sea and nests are washed away. Even migrating to warmer climes leaves them prone to hunting and trapping.

But we’re not all bad. It’s with the help of tremendous humans, that the roseate tern is making a comeback. People dedicated to the recovery of the roseate population, and projects in Anglesey, Coquet Island in Northumberland, the Firth of Forth, and Rockabill Island in Dublin, have made a considerable difference to increasing the number of pink-chested breeding ‘sea swallow’ pairs.

And there are things we can do too, directly and indirectly, to help prevent the roseate tern from disappearing in future.

For starters, if you walk near the coast, keep an eye out for nests and young birds camouflaged underfoot. Or you could offer support to UK Roseate Tern projects. Even something like adding sustainable products to your weekly shop, walking or cycling more, or using a water butt can reduce your impact on the environment and improve the situation for the roseate tern in the long term.