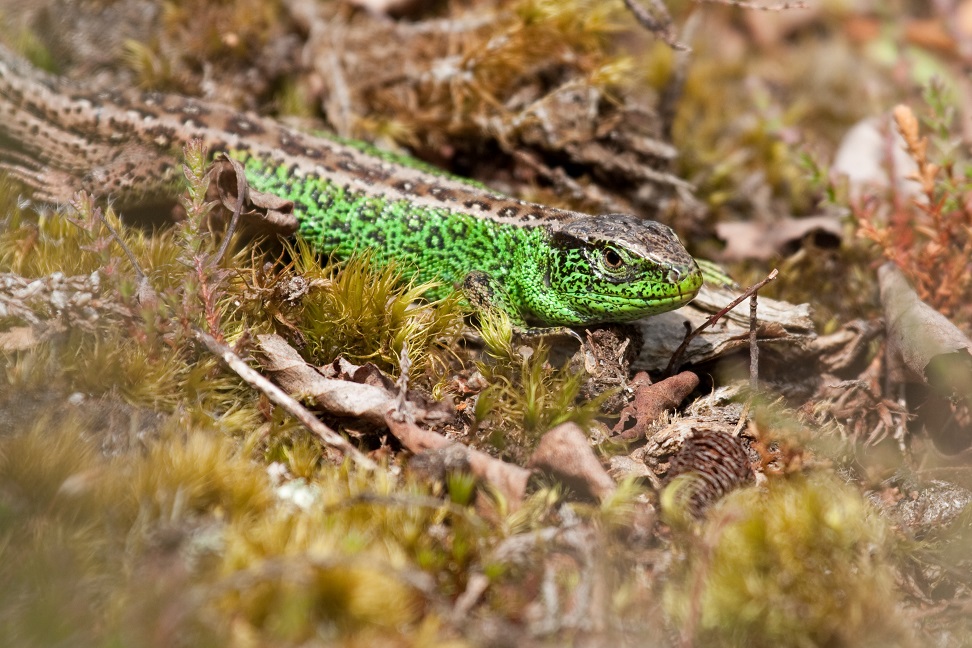 I Am King,
Lacerta – true lizard; Lord of Animals.

Sun King. The star worships me:
submits its shafts to stoke my blood;
burnish my robes this dignified emerald.

Jade Warrior. A gem that glints in the dunes.
My tongue flicks to caress
the grasshopper’s scent. Insect sacrifice.

Great Pharoah. I dismiss the sun; shrink the days;
venture to the underworld
to slink into your dreams and fantasies.

Lord of Light and Shadow. Every autumn entombed;
every spring my resurrection.
Incandescent. Immortal.

More about the sand lizard…

A drizzly Spring morning in 1990 at Heathrow Terminal 2, and I entered the ‘Dead Shed’, a horror chamber of seized illegal wildlife ‘goods’. Rows of cabinets filled with ivory trinkets, tiger and polar bear skins, dried baby alligators in human poses. I worked for Greenpeace and was checking 400 Ibiza Wall Lizards which had been liberated from a suitcase, their iridescent green and blue colours sought after by the ‘exotic’ pet trade. Before their repatriation to Spanish colleagues, I marvelled at these perfect creatures. Nestled in my hand was a tangible symbol of humanity’s troubled relationship with nature – to perceive it as resource; as commodity.

A sweltering May morning, 2020, and I am crouched uncomfortably on Crooksbury Common, Surrey, absently composing an explanation for breaching lockdown rules. It’s my seventh visit to rare heathlands where our rarest lizard lives. I’ve never seen any. The cloudless skies warm them up quickly before sheltering; overcast is better for lizard spotting. I might as well be in Ibiza.

After they emerge from their six-month hibernation, male sand lizards develop vivid green flanks, to entice females. But urbanisation, agriculture and inappropriate forestry have dissected and destroyed their habitats, and populations crashed by 90%. Yet dedicated reintroductions, like at Crooksbury, have proven remarkably successful. Here Amphibian and Reptile Conservation (ARC) – the go-to experts for reintroducing lizards – undertake the painstaking habitat management required. Just up the A3, ARC reintroduced them at Ockham Common with Surrey Wildlife Trust.

As well as rare, lizards are shy. On the scorching heath, I gradually understand I must be less impatient tourist, and more lizard. I enter its world; I slow to its metabolism; mindfully inspect each clump of heather. While contemplating a hole (dug for egg laying), a superb male saunters below me into a maze of heather. I remain still, but my heart speeds. My first sand lizard! Ten minutes later a female scoots by. Another fifteen minutes and the male reappears – darting me an imperious glance.

From his perspective a clump of heather is a forest, a stone is a hill for sunbathing, a breeze is a storm of scent. So wouldn’t a lizard believe the Sun rises for him?

In Ancient Egypt lizards symbolised wisdom and, ironically, plenty. In Native American culture they link the human and spirit worlds. And in Maori cosmogony a lizard pulled the first human from the waters of creation. At least on these heathlands ARC is repaying that debt.