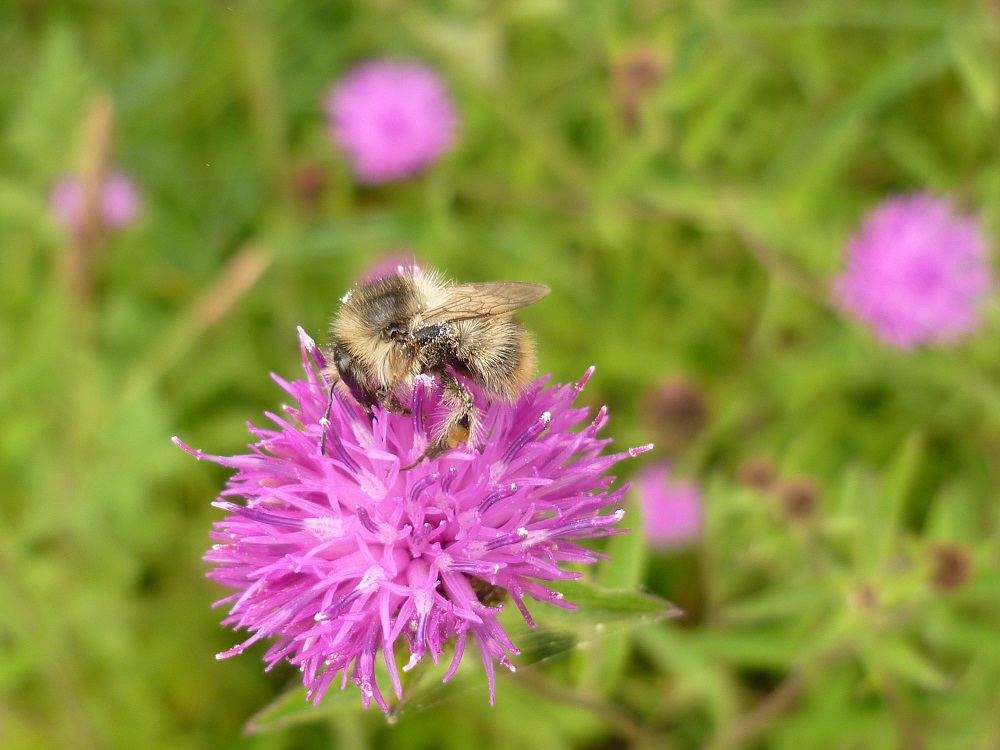 We know, now, what it’s like to wake in spring
To empty shelves, and a quietening.

Think, then, of this long-tongued bumblebee:
shivering awake,
crawling free,

just in time for the meadow’s late-spring food–
–but there’s no meadow, no bread for her brood.

She sits,
awaiting
a fragrant plume.

The air is void.

It doesn’t feel too soon for

yet not a single scent her senses fetch.

See that cropped field as she sees.
That arable desert was a flower-rich meadow

In search of the Shrill Carder Bee

She gets her name from her high-pitched buzz. Small-ish, straw-coloured, and long-tongued, the shrill carder bee, Bombus Sylvarum, is a a meadow specialist,  emerging in late spring to feed on the flowers you’d find in a hay meadow. If you can find a hay meadow.

“They’re rather a fussy bee,” says Rosie Bleet, Bee Roads Officer at Kent Wildlife Trust, where she’s worked on various projects to revive the UK’s population of shrill carder bees. “They feed on plants with long flower tubes, like clovers and trefoils, and they’re picky about nesting – preferring thick patches of tussocky grass. They don’t like to travel too far for food either: given the choice, they wouldn’t go beyond 200 metres of the nest.”

Once widespread across southern England, shrill carders are now our rarest bumblebee. This is mainly due to habitat loss, says Professor Dave Goulson, who has spent most of the last 30 years researching bumblebees. “In 1930, there were seven million acres of meadow; by the end of the 20th century, we’d destroyed 98% of that.”

In fifty years, we transformed the landscape. We ploughed over the meadows and doused the land with pesticides. With no suitable habitat, the population of shrill carder bees crashed. They are now reduced to isolated populations near the coasts of North Kent and South Wales. Things don’t look good.

But there is some hope. Projects run by the Kent Wildlife Trust and others have encouraged landowners, councils, and gardeners to create more bee-friendly habitats. It’s a simple formula: plant more wildflowers, mow less often, and don’t use pesticides. And while the UK population of shrill carders is still vanishingly small, if you go for a walk in August in the South Swale nature reserve in Kent, they could be the bee you most frequently see.

I had planned to go for just such a walk in search of shrill carder bees for this project. Then lockdown happened, so instead I sat in the garden with a patch of wildflowers and a pile of books on bumblebees. And there, with fresh eyes, I saw into a different world. I watched how neatly a bee fits inside a foxglove; I looked for their miraculous flight and sensory superpowers; I tried to imagine what it’s like to land, rather heavily, on the plushy cushion of a rose petal. I was – and I still am – transfixed.