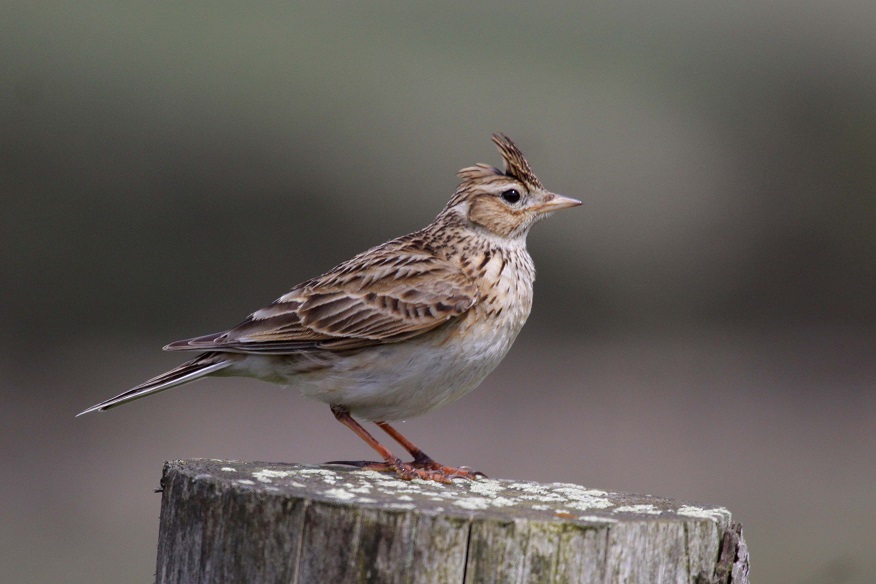 Easing the blue Vauxhall Astra into the dusty field-side car park,
Strawberry rows criss-crossed by straw, poking my flip-flopped feet.
1988. ‘A’ levels sat, driving test passed, about to spread my wings.
Mum leads the way, a punnet on each arm; pick one, eat one, while
Song rains down from the brown speck high above us.
‘[      ]’ says Mum, shading her eyes, squinting up at contrails and cumulus.
It’s a sound-chute, and I stand under it, showering my head,
Shaking loose those last clinging roots.
Curve of brackeny wood at field margin, and that zipper of song, easing the blue.

More about the skylark…

When I heard I had been allocated the skylark to write about, I was thrilled: this is a creature I learnt to recognise as a young child, growing up in Essex and hearing its song while on family walks.

But my pleasure quickly turned to dismay when I realised just how many poets and artists have produced masterpieces about this small, brown bird.

Shelley addresses it as ‘blithe spirit’; Shakespeare’s Romeo talks about it in the same breath as the nightingale; Chaucer, Clare, and Hughes all sing its praises. In April 2020, Ralph Vaughan Williams’ The Lark Ascending was voted the nation’s favourite piece of classical music.

The skylark is that most English of birds, its tumbling, ecstatic song-flights synonymous with rolling pastures and summer heat. Its name has even entered our language as a verb: to skylark, or lark about, means to frolic and have fun.

What could I possibly add, in my modest 100 words? It was daunting.

Skylarks seem invincible when they are high in the air. But they nest on the ground, and their eggs and young are vulnerable to trampling by humans and livestock. In their preferred habitat of farmland, numbers declined by 75% between 1972 and 1996, due to habitat loss, intensified grassland management and falling insect numbers.

I don’t know about you, but when I hear such statistics I tend to blank out. Extinction is too huge to contemplate; we have to think in small pieces, about things we can relate to.

And so, because the poetic heights had all been scaled, and because the skylark’s plight was too overwhelming to grasp, I wrote about a specific, ordinary scene from my past: a visit with my mum to an Essex pick-your-own farm, the summer before I left home for university.

Birds have always felt to me like messengers, passing through, alerting us to the significance of a fleeting moment. I don’t want to think that future generations might have to live their lives without such messengers.

Yes, the statistics are grim, but that bird-bereft future can be avoided, if we act.

Farmers need to reduce herbicide and insecticide use, sow native grasses and leave set-aside areas. Reserves can help too, even in cities; in south west London, where I live, Wimbledon Common and Bushy Park have protected skylark-nesting areas.

If you’re walking near such a site, keep dogs on leads. Tread lightly. And look up, for the larks.