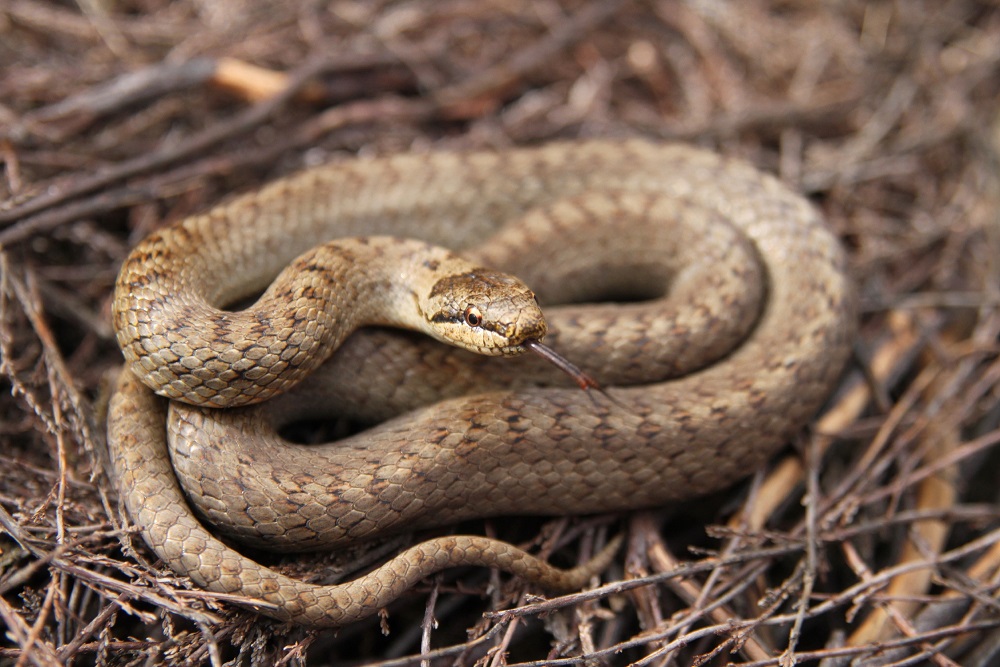 Gone, before we knew it

And it disappears, sliding swiftlybeneath the mossy log. Its slim body coiled tight, its round amber eyes peering out; assessing the risk.

And when it emerges, to weave through heather, its Harris Tweed coat proves cunning camouflage.So when the intent lizard sashays by, it barely sees the mouth that snatches it home.

Yet we can still kill what we can’t count or catalogue. With hate and housing and fire and farming, we’ve driven this creature from its heathland habitat. Just a few more human errors and it disappears.

Snakes have never had a great public image. From Eden to Slytherin, they are rarely cast as the good guys.

So I was underwhelmed when I learnt my allocated creature was one of the UK’s three native snakes – a species I never even knew existed – the smooth snake.

But how wrong can you be? With a heart-shaped mark on its head, round golden eyes and Cleopatra-style ‘eyeliner’, the smooth snake is exquisite. It is also very petite: less than 70cms long and slim as a pea shooter, with sleek grey/brown tiled skin.

It has an endearing, coy nature. Whereas the adder basks brazenly in the sun, the smooth snake burrows under mossy ground and hides beneath stones or logs. And when it does venture out, it blends so effectively with vegetation that it’s virtually invisible.

This elusiveness means there’s still much we don’t know about the species. We do know they live in lowland heathland in southern England. And that they are non-venomous, partial to sand lizards, slow worms and small mammals, and are preyed upon themselves by hawks, foxes and weasels.

But we remain unsure about their most elementary likes and dislikes, such as their ideal hibernation conditions. This means we don’t know for sure that we are creating the best environment for them, even when we manage heathland with the smooth snake in mind.

Their undercover tactics also make them hard to count. There has never been a systematic tally of the smooth snake – which was only identified as a unique species in the mid-19th century – so we can’t tell if it is declining or not. But the fact that 85% of heathland has been consumed by expanding towns, farming and forestry since 1800 suggests their numbers have plummeted in the past two centuries. And with much of our remaining heathland near growing urban centres, smooth snakes remain at risk from fire, domestic animals and us.

But it’s not all bad news. Heathland is now defended from development by law. And efforts are being made to nurture this sensitive habitat, and to link isolated patches into a heathland corridor for native fauna.

The smooth snake is also now a protected species and, since the 1970s, has been successfully reintroduced in Surrey, West Sussex and Devon by organisations like Amphibian Reptile Conservation (ARC). ARC are now undertaking a four-year survey to advance our understanding of the smooth snake, so we can better care for and conserve it.

Hopefully, in doing so, they’ll help more people realise that this shy southerner is a good guy after all.